There’s an old conversation I love between Gloria Naylor and Toni Morrison. I mentioned it in a previous Black Cardigan letter right after I first read it, and if you’ve worked with me, I’ve probably brought it up to you since. The conversation took place in 1985. Morrison was going to be giving a reading for Song of Solomon, her then-latest novel, and Naylor went over with her tape recorder to talk to her about it.

I have the sense it was originally supposed to be one of those “go over, get some quotes from your hero, walk away with shaky knees” kind of interviews but instead the conversation lasted all day and into the evening, and the two published it in the Southern Review, with an introduction from Naylor and an afterword from Morrison. It’s something like forty pages long and amazing. You can find it in Naylor’s collected conversations and I’m pretty sure Morrison’s too.

What initially interested me about it is that, at the time it took place, Morrison was in the middle of writing Beloved. But it’s not Beloved yet; it’s a novel-in-progress that bubbles up here and there as a point of rue: “I have about 250 pages and it’s overwhelming me” and “I think, at the moment, that I won’t write anything after Beloved.” Which if you’ve ever been stuck deep in the tarpits of a book, you will recognize the latter sentiment. (Apparently this is something Morrison used to say with each of her books. Like “no, this is the last one.” She might still.)

For her part, Naylor had published her first novel, Women of Brewster Place, a couple years before, and won a National Book Award in 1983 for it. But she was still a couple years off publishing her third book, Mama Day. Currently, Mama Day doesn’t get read or considered nearly enough—when Naylor died in 2016, it didn’t even get a mention in her Times obituary—but it’s my favorite of her books, one that I will commend to your attention again if you haven’t already read it. And I’ll add that while it’s an important book, it also functions as a wonderful take-to-your-bed novel. It’s the book Naylor herself said that she felt she became a writer while writing—even though she had written two books before it (and again, had won a National Book Award). She doesn’t mention it during the conversation, but I picture it as being in the room too, like a pot on the side of the stove with beans soaking in it.

FEAR AND HOW WE PUT OURSELVES ‘OUTSIDE’ TO AVOID IT

I’ve been thinking of the conversation a lot this week because of an exchange the two have during it about fear:

TM: How old were you when you got married?

GN: Thirty. I was twenty-nine when he proposed. I was going to turn thirty in January. Then he proposed over the telephone—long distance collect when I was twenty-nine and eleven months old. I was making that twenty-nine to thirty transition, saying to myself, “Well, what have I done with my life? I better go on and get married.” It was really fear. Do you know Marcia Gillespie? I met her that November of 1979 because I sent Essence one of my short stories and her secretary called me and set up a lunch appointment—my first literary luncheon. And she just sat down and said, “Sister, if you do anything, keep writing.” And that scared me. And so his proposal coming on the heels of that statement sort of gave me a way out of my fear. I didn’t have to face the terror of the dream I had lived with all my life coming true—that was untraveled terrain. But marrying somebody—anybody—was very traveled terrain, because I grew up feeling somehow that that was how you made your definition. Although Marcia had offered me the hope of another way to make a definition, his was safe—it was conventional.

TM: That’s what I want to explore in this new book. How we choose to put ourselves someplace else, outside, rather than in here, inside.

The “collect” being italicized always makes me laugh. Anyway, the Marcia Gillespie mentioned was the editor-in-chief at Essence. She left the magazine a year after the meeting Naylor describes to join Ms. as a contributing writer (and she’d go on to become the editor-in-chief there in 1992). She was, in other words, an influential figure extending a supportive hand—and what I appreciate so much about the anecdote is how candid Naylor is that her reaction to this was not “I’ve arrived” glee, or “here is where I began my inevitable upward trajectory of big wins and nonstop amazingness,” but the experience of a fear so profound it sent her loping in the opposite direction, toward a bad marriage.

Morrison’s response is great. She immediately understands and says, That’s what I want to explore in this new book. How we choose to put ourselves someplace else, outside, rather than in here, inside. The choice she’s delineating is one between staying inside or putting ourselves outside.

Implicit there: Staying inside is harder, more uncomfortable. Going back to Naylor’s phrase, it’s where the “untraveled terrain” is. Putting ourselves outside is easier. You know what to expect, and that’s a comfortable feeling, even if what you can expect isn’t all that great.

Naylor and Morrison were talking about the big pivotal moments in life, but I think it’s a useful way to understand what happens in writing when you hit an unknown in whatever you’re working on and feel yourself immediately wanting to push away from it and go do something else. To place yourself outside rather than staying inside the project. You will recognize this neural push, of course. I enjoyed this recent exchange between Kelly Link and Laura Lippman about what writers do when they’re not writing. 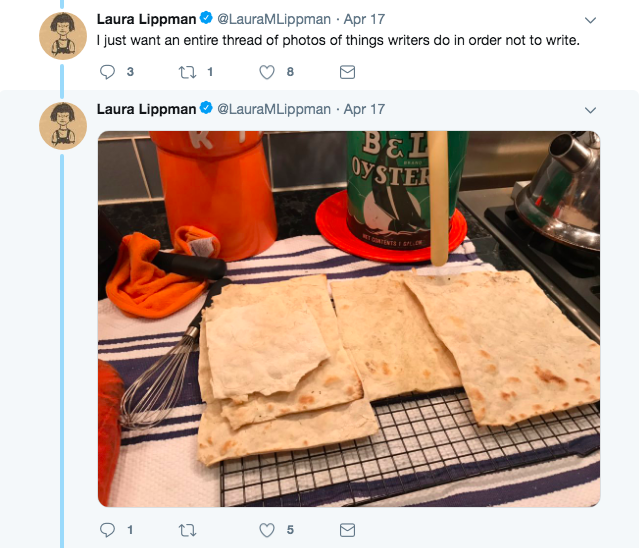 I don’t manage any projects as big as (the very funny) ones Lippman shares in the thread. Alas for my housekeeping. I mostly just float around the house, doing things like swabbing at the one corner of the sink that gets stained from coffee spoons getting laid there, stains that never seem to bother me at any other hour of the day, but that I’m like an avenging fiend about during writing time.

I talked about Morrison’s “stay inside” phrase with the writers at the Hocus Pocus retreat a couple weeks ago, and I’ve been using it with myself this week as I got back to work on my book after a few weeks away from it. All week I’ve been trying to pay attention to that moment when, feeling blank and stoopid as I look at the sentences piled up behind the blinking cursor, I have that almost reflexive urge to get up and do something else. Scrub the sink. Make the bed. Eat peanut butter from a spoon. Hop a plane to Antwerp and take up a new life under a new name. And so all week I’ve been consciously saying to myself Stay inside. Stay inside. Stay inside until the urge to “put myself someplace else” passes.

I doubt I’ll ever be immaculate there, but it’s helped and so I’m sharing it today in case you’re having a tricky week (month, year) with this too.

A reminder: Enrollment is currently open for my program Book Beast, where you work one-on-one with me to move forward in your book. Since it began, it’s helped lots and lots of writers get to the end of their drafts, including on some book ideas and manuscripts that had been languishing for years. Only five slots available this year. If you’re curious, find more info here.

Until next time,
hoping you accept no proposals that come collect,
CAAF

p.s. If you’d like to share a link to this letter, you can find it here. And if you haven’t signed up for the newsletter and would like to, you can do that here.