In the past week I’ve gotten to hear the word ‘faff’ twice in conversation. Two different speakers. One was a British friend, the other an Australian (“I was faffing around Sydney”)—both times a delight. Usually I prefer the OED for looking things up but here the Wiktionary entry is the more satisfying:

It includes a nice nugget on the etymology of “faffing”:

While looking all this up, I found I’d slipped into thinking in the rhythms of a faux Frank O’Hara poem. It’s irresistible once you start. Like:

And I’ve read ‘faffing’ in a book
And heard it in the movies
But never in the conversational wild before
Then twice in one week!
And it started raining and snowing, and you said it was ‘faffing’
But ‘faffing’ is when it blows in gusts…

I’ll put the O’Hara original here, on the excuse that it’s easy to forget between times how charming his poems are, how immediate. 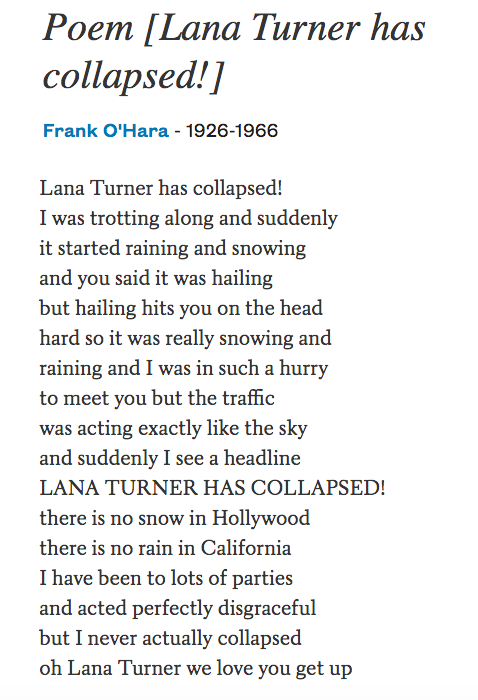 An aside: I’ve mentioned this elsewhere, but when I moved to Asheville in my early 20s, which was now a long time ago, I applied for a job at the café at Malaprop’s, the main bookstore downtown. I worked on my application a long time in order to make it look like it had more to it than “temp – Fort Worth Mortgage” and “attendant — Golden Nozzle Carwash,” etc. And at the top of the application, I wrote that I was “working on a biography of Frank O’Hara.” This was 100% sincere. That was the plan. What’s a mystery to me now is how exactly I meant to execute it, there in 1994, with my single library card and only the dimmest AOL-tinged sense of what the internet was.

I did get the barista job and still have a scar from where, a couple months into it, I sliced off the tip of my finger when my crush, the Sprout Farmer, came in with his girlfriend and I got distracted slicing their bagels. It wasn’t a terrible cut, but it bled a lot, and the memory is still acute of having to sashay to their table with the order a few minutes later as if nothing had happened and there wasn’t an absolutely ginormous scarecrow mitt of paper towels and dishtowels and slapstick calamity wrapped around my hand. I have served lots of bagels and acted perfectly disgraceful but I never actually collapsed. (By the bye, I saw the Sprout Farmer out of the blue a couple weeks ago at my corner coffee shop—the same one where I’m currently tapping out this letter. And I’m happy to report he appears well, looks startlingly the same, only a little more solemn and grave in aspect. I was standing in line behind him and realized I can no longer remember his name. Because time, but also because the entire period of the crush I only thought of him as “the Sprout Farmer.” Though I enjoy thinking that maybe it’s because he never had name, like he’s just been around since time began, farming sprouts and popping into various Asheville coffee shops to discombobulate the staff, green-eyed and solemn and eternal.)

All this faffing aside, it’s been an upsetting week. Seeing the news of what’s happening in Georgia, Alabama, and Ohio. I’ve felt that peculiar combination of stunned and hyper-alert that’s the particular emotional cocktail of the past couple years. That’s why this week’s letter is about faffing and Frank O’Hara instead of what I’d originally planned. Thinking about “Lana Turner” lsent me on a spin of his poems for the first time in a while. What I appreciated reading them was the ways in which they seemed to be vibrating at their own hyper-alert frequency—different worlds collapsing in them, a different sense of how one might be trotting and faffing along in the midst of that collapsing, but still a neurologically sympathetic hyper-alert “here I am, here is what I’m thinking and feeling” body vibration all the same.I felt really grateful for it, for how it gave me something else to hum to.

“Adieu to Norman, Bon Jour to Joan and Jean-Paul” is the O’Hara poem I first imprinted on in college. It begins this way: 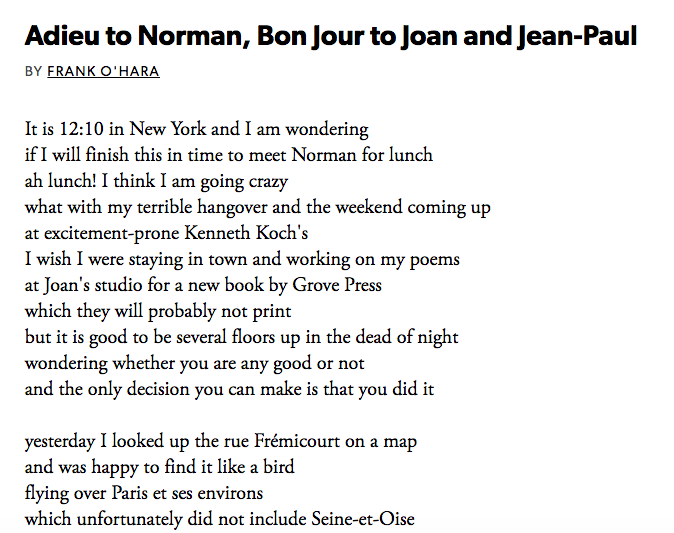 Rereading it and other O’Hara poems last night, I was reminded of Morgan Parker’s poems from There Are More Beautiful Things Than Beyoncé (highly recommended), both for their New York-ness and how reading the poems you have the feeling of the fullness of another person’s consciousness—the big fish thoughts, the silvery little minnow thoughts—scooped up and made into a pond for you to look at.

This is from the start of one of Parker’s poems, “Another Another Autumn In New York”: 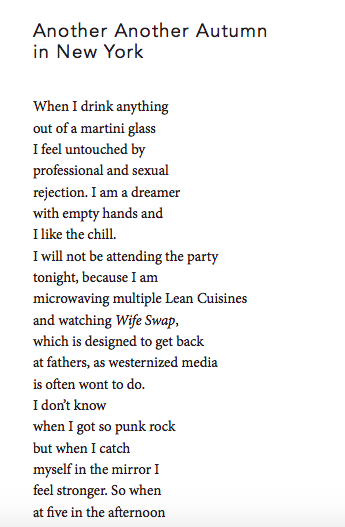 And then, jumping back to O’Hara, here’s the close of his “Adieu to Norman,” the same poem that I shared the start off above. 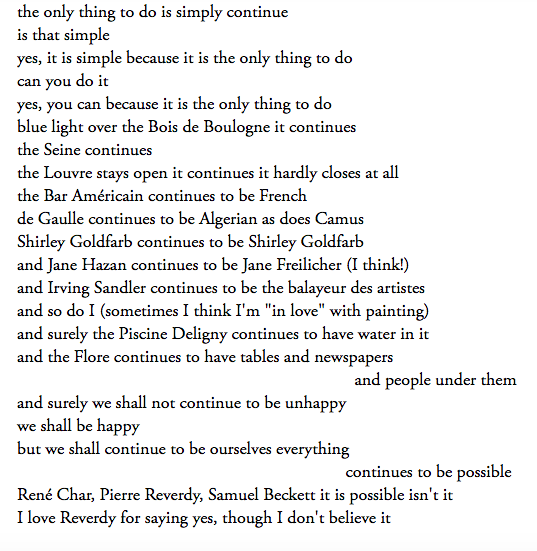 “Surely we continue” and “though I don’t believe it”—both are in the chord this week.

There are still a couple spaces open in Book Beast, the program where you work one-on-one with me for six months to make major progress on your book. If you’re curious, find more info here.

Until next time,
with all good wishes to you, Shirley Goldfarb, and the Bar Américain,
CAAF

p.s. If you’d like to share a link to this letter, you can find it here. The rest of the archives are here. And if you haven’t signed up for the newsletter and would like to, you can do that here.

p.p.s. If you’d like to support the women of Alabama right now and their right to access reproductive care, including abortion, I recommend sending a donation to the Yellowhammer Fund.