I’ve been immersed the past couple weeks in the novel Emma for a Black Cardigan-related project, and working on that led me to a marvelous document held by the British Library. The document, titled “Opinions by various people of Jane Austen’s work,” consists of eight sheets of paper, closely written. Its creator was Jane Austen. The first five sheets record what her family, friends, and acquaintances had told her about Mansfield Park; the next three sheets, what they said about Emma. The two novels—Mansfield Park came out in 1814, and Emma the following year—were published on the heels of Sense and Sensibility and Pride and Prejudice, so many of the opinions have to do with whether people liked these new books more or less than the first two.

I find the entire document v., v. funny and fascinating. You can sense Austen gliding between true curiosity about the feedback (an interest along the lines of “which parts of my book worked, which parts didn’t?”), pride (especially when recording sibling approbation), and amused contempt (looking at you, Mrs. Bramstone and Mrs. August Bramstone).

You can scroll through the full document here. (Click “transcript” on the right-hand side for easier reading.)

Cherry-picking a handful of the Mansfield Park opinions:

• Fanny Cage – did not much like it – not to be compared to P. & P. – Nothing interesting in the Characters – Language poor. Characters natural & well supported – Improved as it went on.

• Mrs Bramstone – much pleased with it; particularly with the character of Fanny, as being so very natural. Thought Lady Bertram like herself. –Preferred it to either of the others – but imagines that might be her want of Taste – as she does not understand Wit.

• Mrs August Bramstone – Owned that she though S. & S. – and P. & P. downright nonsense, but expected to like M.P. better, & having finished the 1st vol. – flattered herself she had got through the worst.

Pause to appreciate the full-strength dowager-ness of “As she does not understand Wit.”

I became interested in the “Opinions” document because of a passage from Claire Tomalin’s Austen biography that summarizes the reaction in Austen’s circle to Emma. The short version is that even Emma, a novel so handsome, clever, and ingeniously constructed—I repeat, even Emma!—received an all-over-the-place reception:

Jane Austen herself was far from confident that Emma would be well received. Some of her fears were expressed to Mr. Clarke in December 1815: “My greatest anxiety at present is that this 4th work shd not disgrace what was good in the others … I am very strongly haunted by the idea that to those readers who have preferred P & P it will appear inferior in Wit, & to those who have preferred MP. very inferior in good Sense.” The first responses from readers were not reassuring. Out of the forty-three “Opinions” of Emma she noted down, twelve were distinctly hostile, and only six gave unreserved praise. Four said they liked it best of her works so far—two being her brothers Francis and Charles—but, just as she had feared, seventeen said they preferred Pride and Prejudice. Within the family, Mrs. Austen was one of these. At least she thought it “more entertaining” than Mansfield Park, whereas Cassandra was one of nine who expressed a preference for Mansfield Park. Fanny could not bear Emma herself [ … ] [Austen’s] nephew Edward also kindly pointed out that she had made Mr. Knightley’s apple tree blossoms in July.

Other opinions, all of them just as contradictory, follow. Maybe you won’t be astonished by this, but I was, and you may want to file it away for next time you’re feeling creatively ego-bruised: OUT OF 43 PEOPLE WITH WHOM JANE AUSTEN DISCUSSED EMMA, ONLY SIX GAVE IT “UNRESERVED PRAISE.” ONLY SIX!!!

I did enjoy the nephew giving her the note on the apple tree’s blossoming in July as a “this is how family is” kicker, though. And I was prepared for that particular point to crop up in the Opinions because my edition of Emma has a lengthy footnote about the novel’s “notorious” apple tree mistake that elucidates a few of the different angles critics and academics have taken to explain it, e.g., “Evan Nesbit, however, suggests that Austen’s late-flowering apple trees might reflect the effects of the exceptionally cool spring of 1814,” and so on. (Ain’t no mountain high enough! Ain’t no rabbit hole deep enough to keep me from Ja-ne.)

A few other stray points from the Emma swim:

• The #31 edition of the Black Cardigan letter shared six words from Jane Austen novels, ranging from familiar words to ones that are less so (‘nidgetty’!). This reading of Emma, I ended up with ‘mizzle,’ ‘captious,’ and ‘ridicule’ (as an alternate spelling of ‘reticule’) written in the margins of my notes. I was especially glad to be reminded what a good word ‘captious’ is. A scrawling trail also indicates that I was trying to count how many times Mrs. Elton mentions her brother-in-law’s ‘barouche-landau,’ but I must have left off somewhere as “6” is the last number recorded and we know the actual number is closer to six hundred. (If you, like me, have spent decades reading about barouche-landaus in novels without having any fixed idea what one looks like, here you go.)

• There’s a new Austen-related book coming out in March that I’m excited to read. It’s by Ted Scheinman, and it’s called Camp Austen: My Life As An Accidental Jane Austen Superfan.

• “If You’re A Person Of A Certain Age, Is It Possible To Read Emma Without The Corresponding Scenes From Clueless Playing In Your Head As You Go: A Clinical Investigation.”

“My Mother – thought it more entertaining than M.P. – but not so interesting as P. & P. – No characters in it equal to L[ad]y Catherine & Mr. Collins.” Close-up of a page where Jane Austen collected various people’s opinions of Emma. (Courtesy of the British Library.)

• The Awl, 2009-2018: “The surprise shouldn’t be that The Awl didn’t last, it should be that it lasted as long as it did.” I worked at the site early on, 2011-2013, but, like so many others, loved it dearly for its run. The last couple days of posts were super Awl-y and excellent, and I’d also point you to this piece by Jia Tolentino which celebrates the site along with its also-now-shuttered magical sister site, The Hairpin.

• The fashion of the Black Panther L.A. premiere. (If you’ve had a bleak week, I encourage you to click away.)

• This recent letter from Helena Fitzgerald starts with a wonderful description of the painting The Wedding At Cana and goes on to describe her own City Hall wedding at the end of last summer: “The ceremony was at once slapdash-casual and blindsidingly momentous.”

• Charming, funny interviews with The Good Place’s Jameela Jamil and Manny Jacinto. The Season 2 finale was last night—if you haven’t started watching yet, now’s a good time to catch up. That show and Star Trek: Discovery are my two favorites right now. (I still need to push past that first lung-heavy episode of The Crown.)

• Lili Loofbourow’s “The Female Price of Male Pleasure”: “The world is disturbingly comfortable with the fact that women sometimes leave a sexual encounter in tears.” 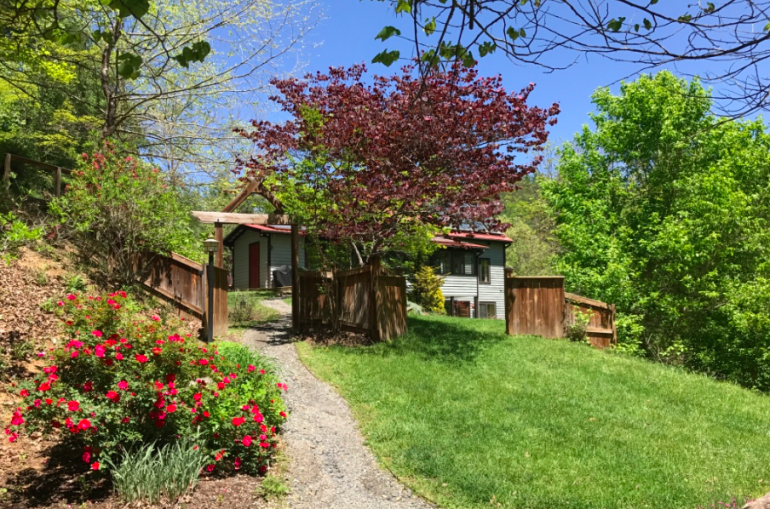 A picture I took at the retreat place last April. (Not shown: goats.)

A picture I took at the retreat place last April. (Not shown: goats.)

I’ll be hosting a writing retreat near Asheville this spring, during the weekend of April 26th – 29th. The place where I’ll be holding it is gorgeous (an objective truth). It’s about sixty-some acres—there are mountains of course, but there’s a river, too, as well as goats and gardens and some nice looping trails around the woods. The weekend will include dedicated writing time as well as some workshops to help you jumpstart or dig deeper into your project. I’ll have space for about ten to fourteen people, depending on how people choose their room accommodations.

I’ll be sharing more about the retreat in my next letter, but if you’d like to receive info in advance, either hit reply on this letter or email me at blackcardiganedit at gmail dot com and I’ll put you on the list!

Until next time,
in certainty that your late-flowering apple trees were not a mistake, but only the reflection of an exceptionally cool spring,
CAAF