The current theme of the Black Cardigan letter is “Beginnings”; this letter is the fourth and final in a series about Sylvia Plath and $$ at the beginning of her career. Part one was about her first published short stories; part two, about her summer at Mademoiselle; and part three, about the story behind her writing of the poem “The Pursuit.”

For this final letter on Sylvia Plath and $$, I wanted to share something I noticed on my last jaunt through her journals that seemed like a funny and encouraging parable of writing life. It’s about the wayward path she took on the way towards achieving what was the ultimate goal of her early writing career, getting a poem in The New Yorker.

In the (absolutely enormous) volume of her early letters that was published this year, Plath’s yearning to have a poem published in the magazine shows up—rough count—a thousand million times. From a 1952 letter she wrote in college to her mom (typos left in):

The best letter, in a way, was a rejection slip. But this one bore the blissful touch of an editors hand, in penmanship and real ink too, and it said “PLEASE TRY US AGAIN.” And guess where it was from ….. The New Yorker! … Needless to say, I am thrilled to bits, and will work on poetry this spring, I think … Perhaps by the time you are 100 years old you can say, “Yes, my baby got a poem in the New Yorker.” Well, nothing like being ambitious, but I was amazed and pleased. I figure they don’t ask just everybody to try them again unless they sense promise.”

It’s endearing, yes? With that “in penmanship and real ink too” and “I figure they don’t ask…” (She then repeated the news with the same all-caps PLEASE TRY US AGAIN in a letter to her brother tapped out the same day.) Soon after, she tosses some villanelles towards The New Yorker. The New Yorker tosses them back. She responds by… tossing them another villanelle. (To the tune of “Yes! We Have No Bananas”: “No! We Want No Villanelles”). That villanelle’s tossed back. Months go by. More villanelles are sent. More villanelles are tossed back. (*Louis Prima voice* No! we want no villanelles today.) The magazine crops up in letters as “my unclimbed Annapurnas” and “Some day I must conquer them too.” Years pass. She goes from Smith straight to Cambridge on a Fulbright. She marries Ted Hughes and starts sending off his poems too. Now there are two people in the household getting their poems tossed back to them by The New Yorker. (We have a ro-o-ndeau and an Elizabethan sonnet-o but no! we want no villanelles…) In a letter written from England, Plath mentions to a friend that some of Hughes’s stories are out on submission: “… the day either Ted or I get into that glittering rag will be the occasion of a colossal duck and orange sauce dinner with seven different wines for each course; Sorry, Please Try Us Again.”

You get the idea. Unclimbed mountain.

Let’s leap forward to the summer of 1957, five years and a thousand villanelles after that first PLEASE TRY US AGAIN rejection. Plath and Hughes have been married a year, and they’ve moved to the U.S. so Plath can take a job teaching at Smith. As a belated wedding gift, her mom, Aurelia, has rented a cottage for them on Cape Cod. Mrs. Plath isn’t wealthy; the Cape Cod cottage isn’t cheap—this is a grand and generous present.

Seven weeks of summer. Splendid isolation of ocean and beach. Nothing to do but write. It’s an opportunity that has “make the most out of me, you have no excuse not to” emblazoned across it. So of course it becomes hard to write anything. 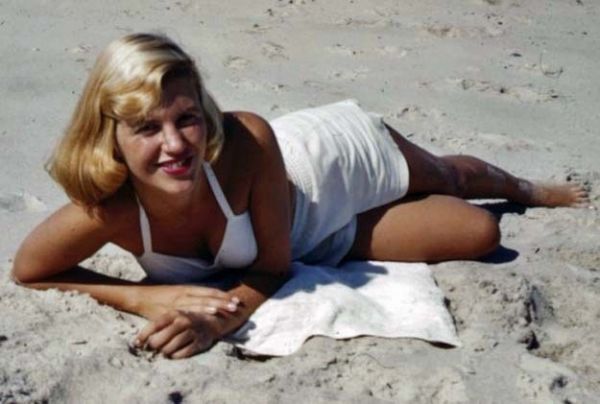 At the beach in 1954. Part of the collection of The Lilly Library, Indiana University, Bloomington, Indiana.

HORROR IN THE DUNES

Plath and Hughes arrive at the cottage on July 15th. “In six weeks you better be on a pile of manuscripts,” Plath tells herself in her journal a week in. The pile she wants to have by summer’s end is a rough draft of a novel, a bunch of poems, and a few short stories. Evidently there’s no one wandering the Cape Cod beach that summer to help her prune that list to something that’s FEASIBLE IN THIS UNIVERSE. Never mind. Love Plath, love her Herculean to-do lists. She’s always driven to hyper-achievement, but another element is fueling the “pile of manuscripts” ambition of that summer, too; an anxiety that, at 25, she’s washed up, the long string of successes behind her a talented teen’s giddy output. As she puts it in one journal entry, “That’s my trouble. I see it very clear now: bridging the gap between a bright published adolescent which died at 20 and a potentially talented & mature adult who begins writing about 25.” A pile of manuscripts would be proof that that talented & mature adult had emerged.

As Diane Middlebrook chronicles in Her Husband, she also spends most of that Cape Cod summer afraid she’s pregnant, a fear so profound she can’t even name it in her journal until she gets her period and the scare is over. Meanwhile, even as she’s not naming the fear, she’s making notes for a story about a “woman at end of her rope with husband, children” because of “bills, problems, dead end.”

Still, she works on some poems. She writes a couple stories. She swims in the ocean and gets a good tan. You get a sense she’s trying to dig in and enjoy this expensive luxury experience, with its freight of being paid for by her mother (who surely used a lot of squirrelled-away savings for it)—that if it happened now, she’d be Instagramming the hell out of it and it’d be all beach grass and swimsuits and wineglasses and glinting sea—but can’t because her eye is always on the calendar and the days getting X’ed off there. “How we cling to these days of July: August is a September month.” And: “Five more weeks. The day after the day after tomorrow it is August.” Realization that any “idiot can waste the summer getting tan only to lose it.” Then: “It is, o god, August 9th” and “I am caught in the six days before this is over.” It starts to sound less like an idyllic writing-vacation and more like a horror movie (Menace at Cape Cod).

At the close of summer there’s no pile of manuscripts. As a capper, that last week, Plath meets “two young writers” who “are both through with the first draft of novels, 350 pages of typing.” The journal entry doesn’t give their names, and I like to think the Two Young Writers weren’t fellow vacationers at all, but supernatural figures who’ve lurked around Cape Cod since time immemorial, lying in wait to pay visits to the cottages of blocked writers “just to say hi” and talk about the 350-page drafts of the novels they just completed.

THE PARTICULARITY OF THE SPINDLY, PRICKLING, SLEEK, SPLAYED, WAN, AND LUMINOUS

I promised a parable, and it’s this one, developed from a note in Anne Stevenson’s biography. Early on during the Cape Cod summer, Plath gives herself some good writing advice in her journal:

Poems are bad to begin with: elaborate ones especially: they freeze me too soon on too little. Better, little exercise poems in description that don’t demand philosophic bear-traps of logical development. Like small poems about the skate, the cow by moonlight, a la the Sow. Very physical in the sense that the worlds are bodied forth in my words, not stated in abstractions, or denotative wit on three clear levels. Small descriptions where the words have an aura of mystic power: of Naming the name of a quality: spindly, prickling, sleek, splayed, wan, luminous, bellied. Say them aloud always. Make them irrefutable.

Start small. Be specific; be particular in your description.

She forgets this advice and goes after some big grand poems. Reminds herself of it:

The artist’s life nourishes itself on the particular, the concrete; that came to me last night as I despaired about writing poems on the concept of the seven deadly sins [ed. note: hee!] and told myself to get rid of the killing idea: [that] this must be a great work of philosophy. Start with the mat-green fungus in the pine woods yesterday: words about it, describing it, and a poem will come. … That’s where the magic mountains begin.

Then, as often happens with the good advice we give ourselves, she seems to forget it again. But during the last week of the summer—after the pregnancy scare, the stalled starts at various lumbering poems and stories, the visit from the Two Young Writers, a rejection from the Yale Series of Younger Poets award, etc. etc.—Plath and Hughes go out mussel-hunting.

She records it in her journal:

Yesterday: the weird spectacle of fiddler crabs in the mudpools off Rock Harbor creek: a mud flat at low tide, surrounded by a margin of dried brittle marsh grass, stretching away into the yellow-green salt marsh. Mud, damp toward center, alive with the rustle and carapaced scuttle of green-black fiddler crabs, like an evil cross between spiders and lobsters and crickets, bearing one gigantic pale green claw and walking sideways.

The entry goes on like that, specific and particular, the last one of that anxious, defeated summer.

Nothing more about it—it’s clear the verdict is that this was a wasted summer. Then, the following summer, in 1958, there’s a starred entry in the journal. “Seated at the typewriter, I saw the lovely light blue shirt of the mailman going into the front walk of the millionairess next door, so I ran downstairs. One letter stuck up out of the mailbox, and I saw The New Yorker on the left corner in dark print. My eyes dazed over.” This first acceptance was for “Mussel Hunter at Rock Harbor,” and the poem appeared in the magazine’s August 9, 1958 issue. (“It is, o god, August 9th”—but now in a good way.)

I find this sequence in the journals cheering—how it points to the ways we can’t know what’s going to come of the different lumpish beginnings and faltering starts we make, the experiences we’ve decided we wasted. The holidays are here, but after that there’s the New Year and all the reckoning and resolving that comes with it. If you’re on what feels like the right road with your writing and creative work, I wish you the courage to keep going. And if you’re feeling off course and more wan than luminous right now, I hope this coming year will be the one where you’ll find that those practice runs and lumpy starts, the faltering and the continuing on when it felt meaningless, were, all the while, getting you where you needed to be.

Until next time,
wishing you the happiest of holidays and the determination to say the irrefutable,
CAAF

p.s. A holiday reminder that Black Cardigan Edit offers gift certificates. And they’re pretty, too! If you’re interested in getting one for a writer in your life, you can get in touch here.