The current theme of the Black Cardigan letter is “Beginnings”; this letter is the third in a series about Sylvia Plath and $$ at the beginning of her career. You can read Part One here and Part Two here. There’ll be one installment after this, and then we’ll move on!

The day after she met Ted Hughes at the St. Botolph’s party in Cambridge, on Feb. 26, 1956, Sylvia Plath was supposed to be writing a paper on Racine’s play Phèdre. Instead, holed up in her dorm room and stupendously hungover, she wrote the famous long journal entry about the party: “Then the worst happened, that big, dark, hunky boy, the only one there huge enough for me…”; the sloshing of a glass of brandy “at the place where my mouth was when I last knew about it”; the stealing of the red headband; her biting his cheek; the whirling crashing stamping on the floor. For better or worse, the joint mythology of the two of them as a couple begins with that entry, and alas for all of us who imprinted on it in high school.

The next day, still feeling lousy, she got herself “dressed in slacks and favorite paisley velvet jersey to make me feel better, and wrote a full-page poem about the dark forces of lust: ‘Pursuit’. It is not bad. It is dedicated to Ted Hughes.”

The poem has an epigraph from the same Racine play she was procrastinating writing her paper about: Dans le fond des forêts votre image me suit. And, eventually, she did tap out her paper. A tragedy, Phèdre is written in French but centers on figures from Greek mythology (Theseus, post-slaying of the minotaur; Phèdre is his wife); Plath wrote her paper on the stern theme of “Passion as Destiny” that runs through it. She got the paper back with “the comment that passion is only one aspect and not the fatal holocaust I made it.” Also, that she’d mixed some of her metaphors.

You can trace so many wiry branching threads networked through the poems Plath and Hughes produced during their relationship and its dissolution—Diana Middlebrook’s wonderful, perceptive Her Husband is essential in charting all these silvery whiskery threads—and so it interested me a few years ago when looking up Phèdre, wanting to know more about le fond des forêts where votre image me suit (a surprisingly formal vous-ish kind of me suiting), I saw Hughes had done a translation of the play. It came out in 1998, the last year of his life and the same year that Birthday Letters was published. He’d begun the translation the previous year. A scholar notes how, in translating the play, Hughes “enhanced or introduced the semantic fields closer to his own interests – those referring to hunting, hunger and eating, poison, obsessions, the animal and, crucially, the labyrinthine and the monstrous.”

These themes are hyper-vivid in “The Pursuit” too, which begins:

There is a panther stalks me down:
One day I’ll have my death of him;
His greed has set the woods aflame…

You may not, in our current news cycle of Weinstein-Spacey-Rose etc., be in the mood for reading a poem about predatory lust as enacted by the male animal, and if you’re feeling worn on that score, I’d urge you to skip this all today. Truly—there have been times in my life where I’ve liked “The Pursuit” a lot (it’s got a great jouncing rhythm), but this month hasn’t been one of them.

What interests me about its creation is something Plath wrote in her journal the next year: “My life, I feel, will not be lived until there are books and stories which relive it perpetually in time.” I experienced such a jolt reading that. It made me think of my own high-school imprinting on the narrative of that St. Botolph’s night, the ways reading the entry now is like being in the fourth row of a play you know by heart because you’ve sat through it dozens of times: the young woman goes to the party wearing her red shoes. She goes up the stairs, dances, and “then the worst happens.” All the actors on their marks—inevitable destiny that they’ll come crashing together—and the hungover young woman in her dorm room writing it all down the next day (from a journal entry during this same period: “writing makes me a small god”). In the weeks after the party, Plath keeps waiting for Hughes to show up. “I lay and heard the steps on the stairs and the knock at the door and I leapt up to welcome the fruit of my will.” The “steps on the stairs” is a call back to the imagery of “The Pursuit.” It’s all very witchy. Except the witchiness goes awry—it’s not Hughes at the door, but a guy named John who asks her to a movie. She doesn’t go but stays in to read the Duchess of Malfi, furiously. (For some reason I find the staying in to furiously read Duchess of Malfi especially funny.) 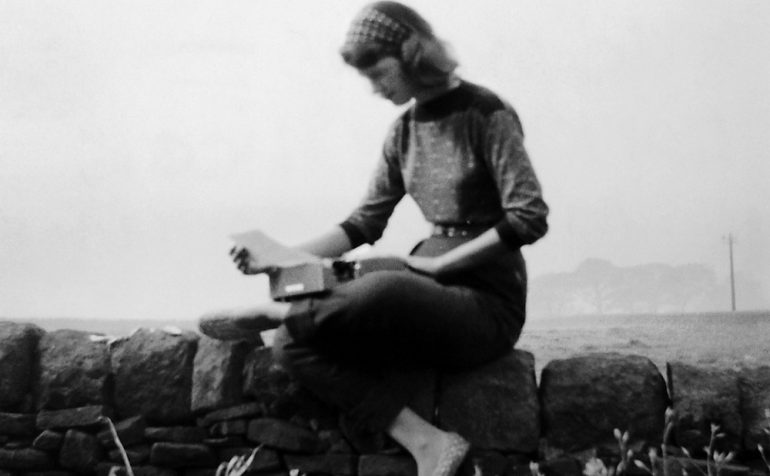 A photo of Plath taken the summer “The Pursuit” was accepted by The Atlantic. (The photo is part of the collection of the Mortimer Rare Book Room at Smith College.)

Plath sent her mom, Aurelia, a copy of “The Pursuit” soon after she wrote it, along with another poem, saying that she thought the two together showed “a rather encouraging growth.” I’m excerpting the letter here for its insight into her own thoughts about the poem as well as the enjoyable little dance she does to explain LUST POEM to her mom:

“The Pursuit” is more in my old style, but larger, influenced a bit by Blake, I think (tiger, tiger) and more powerful than any of my other “metaphysical” poems; read aloud also. It is, of course, a symbol of the terrible beauty of death, and the paradox that the more intensely one lives, the more one burns and consumes oneself; death, here, includes the concept of love, and is larger and richer than mere love, which is part of it. The quotation is from Racine’s “Phèdre”, where passion as destiny is magnificently expressed. I am hypnotized by this poem…

There’s no mention of Hughes in the letter though he’s hinted at. Instead it continues, “Oh mother, if only you knew how I was forging a soul!” and then examines her feelings for another boyfriend, Richard Sassoon, then pulling away, who “I have loved … above and beyond all thought.” It’s a nice reminder that there were other figures on the stage then, that lived experience is rarely as neat as the story shaped after.

“The Pursuit” was accepted by The Atlantic during the summer of 1956 (so less than six months after it was written). By then, Plath and Hughes were married. She received $50 for the poem, and the impetus for these past few letters about Plath and $$ began, in part, with my curiosity about what that fifty bucks would equal today. Answer: About $450. The acceptance was a major buoying event—the first one she’d gotten that year, and the check came along with a nice letter (“a fine and handsome thing”) and the news that the poem would appear on a page by itself. She saw the poem as marking a major shift in her poetry; if you look at her Collected Poems, it’s the third one in. The earlier poems are shuffled to the back, under Juvenilia.

In a letter to her mom about the acceptance, she says, “keep an eye out for the issue, and buy up lots of copies.” In another, she reports that she’s seen a proof of the poem in layout, that it “looks terrific, with French quote from Racine and all from ‘Phèdre’, meaning in case anyone asks you: ‘In the depths of the forests your image pursues me.’”

Keep an eye out; buy up lots of copies. In case anyone asks you, this is what it means.

I’m pleased to announce that Book Beast will be returning with a start date this January. This is a seven-month program I designed to help writers make major progress on their books. This will be the third time I’m offering it, and it’s excellent if you’re a writer who, because of a day job or other responsibilities, finds it easier to keep up momentum with structure and accountability in place and/or if you’d like to have an editor-companion along for one-on-one guidance and support as you go. This run of Book Beast is starting January 1—so you can get a great driving draft off the start of the year—and will run through the close of July.

Enrollment started to fill a few weeks ago, so I only have two spots still available. I hope one of them is yours! You can learn more here.

Until next time,
wishing you well with all the fine and handsome things you’re making,
CAAF

p.s. If you haven’t already subscribed to this letter and would like to, go here.