In the last letter, I shared two favorite passages from Zadie Smith’s White Teeth and asked you to send along your own, if you had any, as an experiment. I may have had an inflated sense of how many of you were poised and all in a quiver to share a passage from a novel that came out in 2000, but mercifully a few of you responded and I’m grateful.

As it happens, Cat F. sent me this passage even before I asked, back when this discussion of White Teeth began, nine years ago, in May. (It was partly what made me wonder what other passages people might have stored away.) She shared this on why she picked it:

ZS knows her audience – no better place for a skin-crawling depiction of the overwhelming everything of modern life than in a medium whose consumption demands spending leisure time in disciplined separation from it. And her language, ugh. “Corporate synesthesia” is so dense and precise it’s disgusting.” 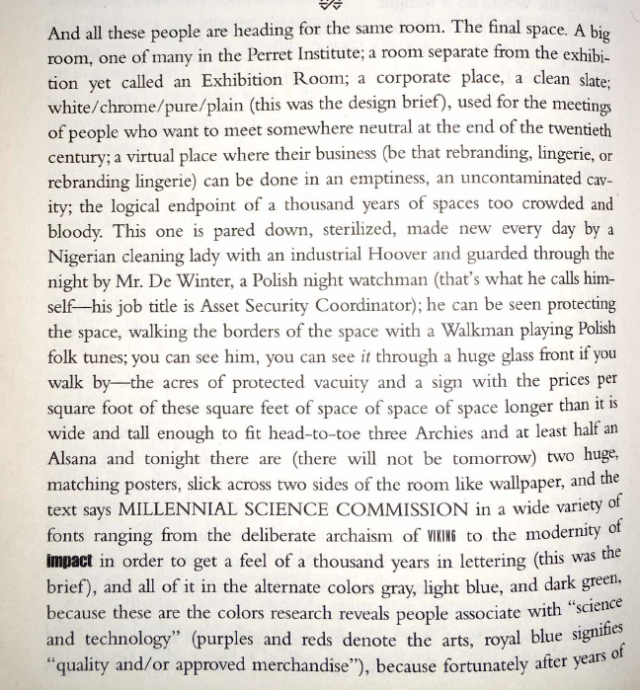 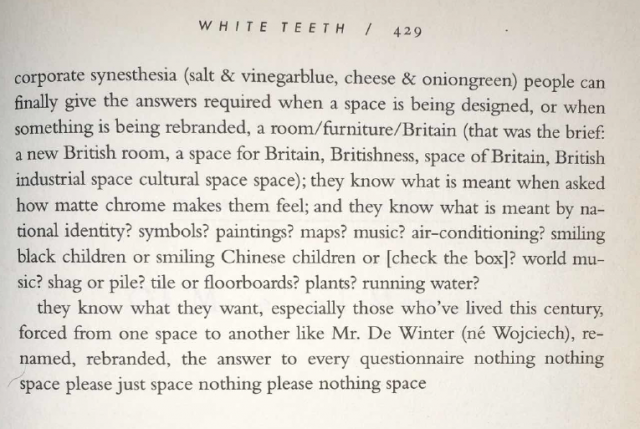 So, now i can’t remember where in the novel my favorite quotes and passages came from, but i wrote them down (because i’m the nerdiest nerd!).

“You are never stronger… than when you land on the other side of despair.”

“Full stories are as rare as honesty.”

This quote about homosexuality is certainly not a “deep” or profound bit from White Teeth, but it does make me laugh every time I think about it. It IS that fun, I say!

“Why do they always have to be laughing and making a song-and-dance about everything? I cannot believe homosexuality is that fun. Heterosexuality certainly is not.”

I have always loved this sentence—and it’s one of the only things I remember from a book that I mostly remember as something that I loved, taught well, and that my students loved, without really remembering the details of the story at all. But the idea that you only get two chances with teeth seems accurate, sinister, and hilarious to me. And the candy and the man’s racism make the scene compelling and terrifying like that moment in the first Willy Wonka movie when he’s guiding all the children down that psychedelic tunnel. 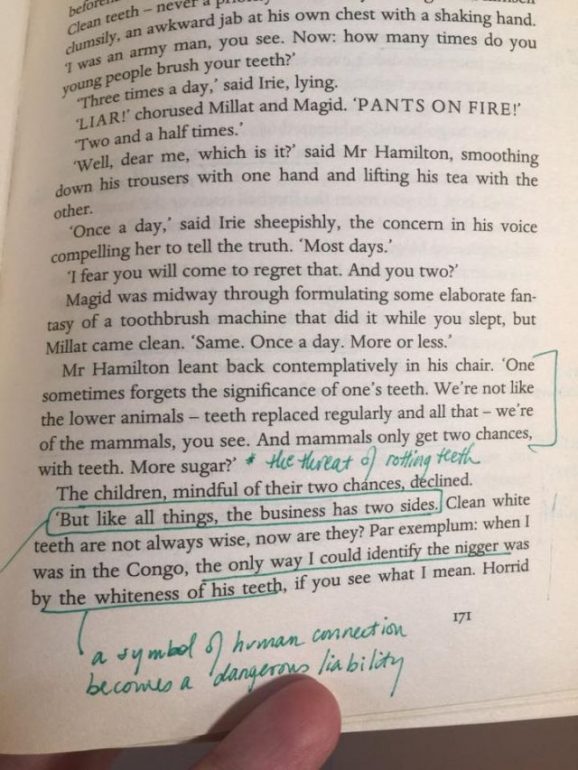 Both of the passages in the last letter had to do with teen crushes, and RH wrote to say that while she didn’t have a White Teeth passage to send, she did have a quote from Karate Chop by Dorthe Nors laying on her desk that made a nice accompaniment to Smith’s line, “Essentially, it transcended Ryan”:

“One of his kind – a man – was part of the idea pre-conceived for women. More than that, any individual you happened to meet was nothing but a potential, an outline to be colored in and assigned content.”

This was a fun thing to do, and I hope to run a similar experiment again soon. Thanks so much to the passage-senders!

So most Sundays, my husband Lowell plays horseshoes with the same smallish group of people. It’s mostly informal and easygoing, except there’s a challenge system that gets sprung every few months or so, and when that happens there’s an unexpected whiff of “pistols at dawn” formality to the proceedings. Lowell’s been playing with this group three years and got involved in his first challenge late this summer. He and his partner, Johnny, won, and he brought home one of the two trophies that circulate around the group. 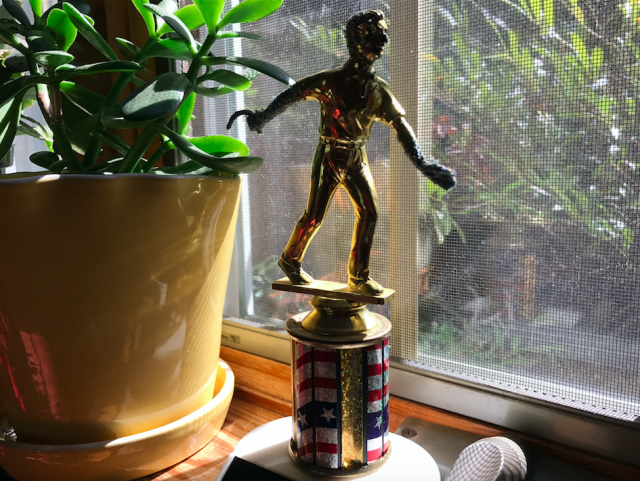 As you can see, at some point in time, someone’s dog chewed on it some. I took a picture of it this morning as Lowell and Johnny had been challenged to appear at the pits at 11:45 a.m. to defend and I was worried I might never see its mutant gray paw again. I’m pleased to report it returned home with him again this afternoon.

For U.S. readers, if you’re looking for somewhere to donate to help Puerto Rico with post-Hurricane Maria recovery, I’ll point you here.

EDITED TO ADD: I originally hit send on this letter late Sunday afternoon but one of the links I’d shared to a Hurricane Maria-related charity activated something in TinyLetter’s scanning software and the letter got held in limbo for a while and by the time it came out of limbo we were in the middle of yesterday’s sadness. I’m using the lag as a chance to insert this bit of Petty poetry from Wildflowers:

Now and again I get the feeling
Well if I don’t win, I’m a gonna break even
Rescue me, should I go wrong
If I dig too deep, if I stay too long
Oh, yeah, you wreck me, baby
You break me in two
But you move me, honey
Yes you do

Until next time,
hoping you land strong wherever you are,
CAAF