For today’s letter, I’d like to try an experiment. I’ll share a couple favorite passages from Zadie Smith’s White Teeth, and then I invite you to send me your own favorite if you have one. Please include a short explanation (maybe a sentence or two) of why that passage of all the passages etc. and also if it’s okay to use your name in the newsletter. I say “experiment” as I don’t know how many of you will have a favorite passage of White Teeth raring to go, but let’s see! Send ’em to blackcardiganedit at gmail dot com by, let’s say, September 25th.

The two passages I picked out are both about teenage girls and crushes, a vortex of energy I always find fascinating, in part because I was—and, as always, sorry to brag here—really good at crushes as a younger woman (Exhibit A). I still love an essay Rachel Monroe wrote several years back on the topic,
“Killer Crush,” where she talks about how “a girl with a crush is very, very hungry.” She also writes: “A crush relies on projection: It’s about externalizing an aspect of yourself onto the unattainable object. (My friend Emily, who crushed on Paul McCartney, is now a professional musician.) But a crush is also about sex.”

Enter stage left this passage, which falls near White Teeth’s beginning, about Clara and her first boyfriend Ryan, who in addition to being Clara’s first boyfriend is also the first guy with whom she’s ever hot-and-heavy. I highlighted the crux sentences but the movement of the whole passage is the thing: 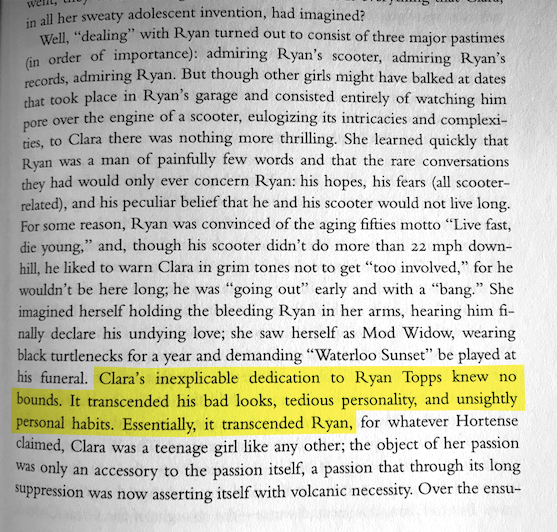 And then, from later in the book, this passage about the crush Irie (Clara’s daughter) has developed on Millat Iqbal, a companion of hers since childhood. In a nice bit of mother-daughter-ness, it echoes with the first passage, without overlapping it, and I like too the observation that one of the pleasures of Millat as a crush—for Irie and for the others girls at the school—is that he represents “a project.” And who can resist a charismatic fixer-upper? 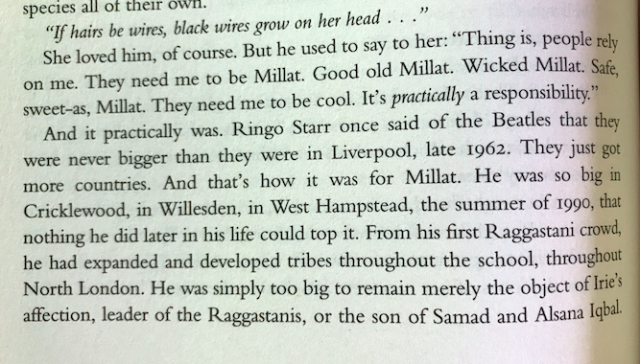 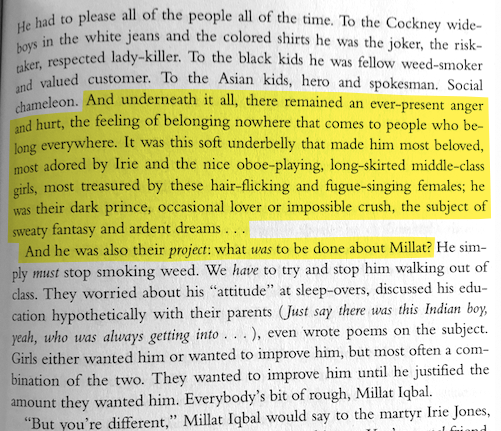 Now you. If you have a White Teeth passage you especially <3, please do send.

Until next time,
wishing you the transcendence of all your crushes,
CAAF

p.s. If you haven’t already subscribed to this newsletter and would like to, go here.
—
Carrie Frye
Black Cardigan Edit