I’ve been rereading The Portrait of a Lady off and on this year. It’s a book I love a lot, though this time I picked it up because it seemed like a funny book to pack for the Women’s March in D.C. and the Penguin paperback was just wedge-able into the little purse I had gotten for the trip (8″ x 6″ x 4″! it already seems like ages ago, doesn’t it?). 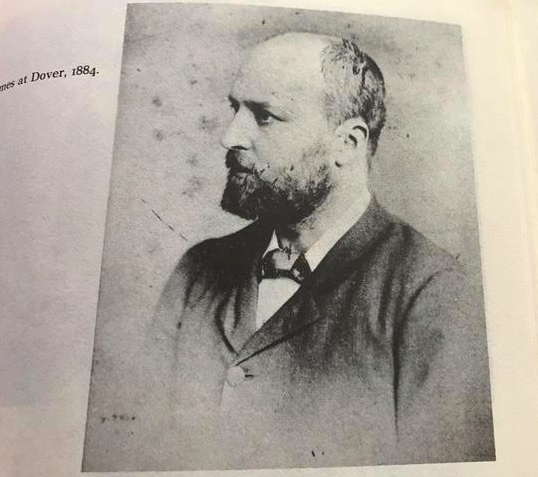 Picture of bearded, still-brown-haired James from Leon Edel’s biography. Not the image of him I carry around in my head!

It was James’s seventh novel and his first masterpiece (that seems to be the broad consensus, though I feel like you could make a case for a couple of the earlier ones). He began work on it at age thirty-seven, when he was still brown-haired and bearded. He’d secured contracts for it to have a concurrent serial run in The Atlantic and Macmillan’s Magazine in the U.S. and England for a total of about $5,000, more money than he’d gotten for any of his previous books. This was 1880. The inflation calculator doesn’t go that far back but, using its earliest year as a base, that places his serial income for Portrait somewhere northward of $120,000 in today’s dollars.

He’d also been telling everyone that this was going to be his big book. To his brother William, who had called 1878’s novel The Europeans “thin”: “I don’t despair, yet, of doing something fat.” A year later: “I shall before very long gratify your ‘pining’ for a ‘big novel’ – or a bigger one at least than these little things.” To his publisher: “I must try and seek a larger success than I have yet obtained, doing something on a larger scale than I have yet done. … I am greatly in need of it—the larger success.” When a critic approached him to write an overview of his novels so far, James put him off, telling him to wait until his next novel was done. “It is from that I myself shall pretend to date—on that I shall make my stand.”

He then left London for Florence to start work on the book.

On the one hand, it seems like marvelous and enviable conditions for going off to write a book—contracts, money, Italy. And on other: like a great deal of pressure, it generally being understood that you can’t go around announcing to all and sundry “I’m off to slay a dragon!” and come back home with a rabbit. So the next couple letters of Black Cardigan, will be about that, as I find it fascinating how, despite having created such pressured conditions for hiimself, James did manage the dragon. Also, there are some enjoyable things to relate about how he wrote it, what problems he ran up against (plot, lack thereof, first section), and the people that were popping in and out of his life at the time, etc. etc. (I am sure I’m going to get in big debt to Michael Gorra’s Portrait Of A Novel as I go, too.)

But for today’s letter I wanted to share this bit from James’s preface to the 1908 New York edition of the book—so his revisiting of the book more than twenty years after its composition. He’s in full late James style here (be warned? be thrilled?), and he’s talking about whether Portrait of a Lady has “objective value”—that is, if Isabel Archer’s story is a worthwhile or ‘moral’ one for a book—and why that’s a terrible measure:

One had had from an early time, for that matter, the instinct of the right estimate of such values and of its reducing to the inane the dull dispute over the ‘immoral’ or the ‘moral’ subject. Recognizing so promptly the one measure of the worth of a given subject, the question about it that, rightly answered, disposes of all others—is it valid, in a word, is it genuine, is it sincere, the result of some direct impression or perception of life.

Underscoring mine. It’s got a beautiful roll and truth to it as a way of getting at a book’s truest “value” (or as a way to measure the worth of one’s own writing-in-progress): Is the writing genuine and sincere, and does it arise from the writer’s direct and unique perception of life?

Obviously, also to be appreciated is the Jamesian use of “in a word” followed by a strong breeze of several other words.

In case you missed my last letter, the big news here is Black Cardigan Edit has revamped! It’s now entirely focused on book-editing services—meaning, if you’re getting your book ready to send off to agents or your publisher, I’m here to give it a good, loving scrub before it goes out.

I’m also offering a program called Book Beast that I’m super excited about and that starts May 1st. It lasts seven months, and it’s an excellent way to make major progress on your book this year even as you keep up with a day job or whatever other responsibilities you have. Find out more about the program here. Right now there are only two spots left (I’m keeping it small), so if you’re interested, please be in touch!

Until next time,
hoping you don’t despair yet of doing something fat,
CAAF