Right now I’m using this letter to share various items I stored away while on hiatus earlier this year. And one of those things was a word: “lucubration.”

I found it in a biography of Van Gogh I was reading after watching Hannah Gadsby’s Nanette (we’re all working through Nanette in our own way). It’s such a good word! It means “laborious work, study, thought, etc., especially at night.” I like it as my friend and writing partner Maud Newton sometimes sends emails on her book work with alarming middle-of-the-night time stamps and it’s nice to have a word to attach to that. Also I like how it links up in the ear with “lugubrious,” an emotion you might feel if what was keeping you up late was a PowerPoint or something.

The subject of being up late at night, working and writing, always reminds me of the Baudelaire poem, “At One O’Clock In The Morning.” There the emotion of being up late to work isn’t lugubrious, but stirred up—a particular vein of high-stepping tantrum-ish spleen that can be enjoyable as it works itself out and you start being able to write. I just reread it, unsure whether I loved it as much as I used to and whether I wanted to include it today, hit “boasting (why?)” and knew I did. It’s from his book Paris Spleen, and translated here by Louise Varèse.

At One O’Clock In The Morning

At last! I am alone! Nothing can be heard but the rumbling of a few belated and weary cabs. For a few hours at least silence will be ours, if not sleep. At last! the tyranny of the human face has disappeared, and now there will be no one but myself to make me suffer.

At last! I am allowed to relax in a bath of darkness! First a double turn of the key in the lock. This turn of the key will, it seems to me, increase my solitude and strengthen the barricades that, for the moment, separate me from the world.

Horrible life! Horrible city! Let us glance back over the events of the day: saw several writers, one of them asking me if you could go to Russia by land (he thought Russia was an island, I suppose); disagreed liberally with the editor of a review who to all my objections kept saying: “Here we are on the side of respectability,” implying that all the other periodicals were run by rascals; bowed to twenty or more persons of whom fifteen were unknown to me; distributed hand shakes in about the same proportion without having first taken the precaution of buying gloves; to kill time during a shower, dropped in on a dancer who asked me to design her a costume for Venustre; went to pay court to a theatrical director who in dismissing me said: “Perhaps you would do well to see Z. . . . ; he is the dullest, stupidest and most celebrated of our authors; with him you might get somewhere. Consult him and then we’ll see”; boasted (why?) of several ugly things I never did, and cravenly denied some other misdeeds that I had accomplished with the greatest delight; offense of fanfaronnade, crime against human dignity; refused a slight favor to a friend and gave a written recommendation to a perfect rogue; Lord! let’s hope that’s all!

Dissatisfied with everything, dissatisfied with myself, I long to redeem myself and to restore my pride in the silence and solitude of the night. Souls of those whom I have loved, souls of those whom I have sung, strengthen me, sustain me, keep me from the vanities of the world and its contaminating fumes; and You, dear God! grant me the grace to produce a few beautiful verses to prove to myself that I am not the lowest of men, that I am not inferior to those whom I despise.

Another good word is embedded in there, “fanfaronade.” It appears with a double “n” in the translation but with one in the dictionary. It means “arrogant or boastful talk” and it had a steep drop off in usage around 1900.

It’s like people hit the 20th century and had no more time for fanfaronading around. Though it’s certain to stage a comeback soon, coming to you as an expensive liqueur, exceedingly bitter with a hint of citrus, a new sort of Fernet-Branca: Fanfaronade.

As this word tree shows, the root word of “fanfaronade” is from the French “fanfare.”

I realized, when I first saw that word tree, that I have been carrying around, unexamined, all these decades, the association of the word “fanfare” with something happening at ye olden court that was so exciting and momentous that trumpets would blare… and all the women of the court would wave their fans with extra vigor. But no. That doesn’t seem to be how the word developed.

Related: In third grade or so, a friend asked me at recess what I thought “comme ci comme ça” meant, and I explained that it meant something like *shrug of shoulders*, and that it was expressing an emotion like you might feel if you had come to see a thing (come see), and having seen it (come saw), gone away not all that impressed. I remember my friend being dubious—“I don’t knowww”—and a strong feeling within me, as I looked out across the gray sere Wisconsin playground, that I was surely 100% correct on this.

One last little amuse-bouche. In Alison Bechdel’s Are You My Mother?, she shares a rejection letter she received in college from Adrienne Rich. 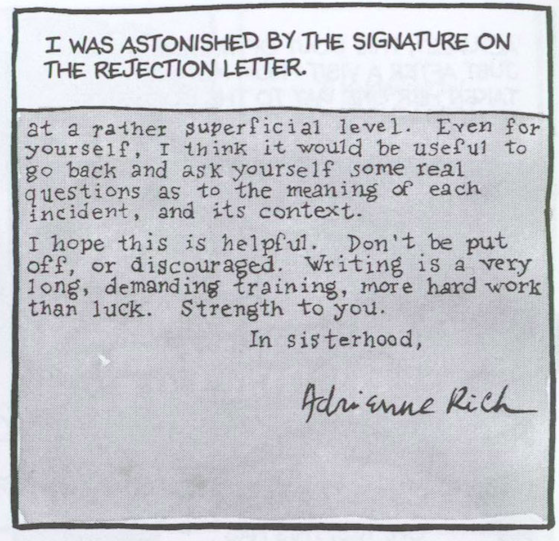 A few weeks ago, I was finally reading Essential Dykes To Watch Out For (and it turns out, yes, it’s essential—and also in its real-time chronicling of events spanning from the ‘80s through the early aughts—including Gore’s loss in 2000 by those few hundred votes in Florida—eerily resonant reading right now). And in the introduction, Bechdel has tucked the other half of Rich’s rejection letter, this time its start and described as one of her “most prized possessions.” 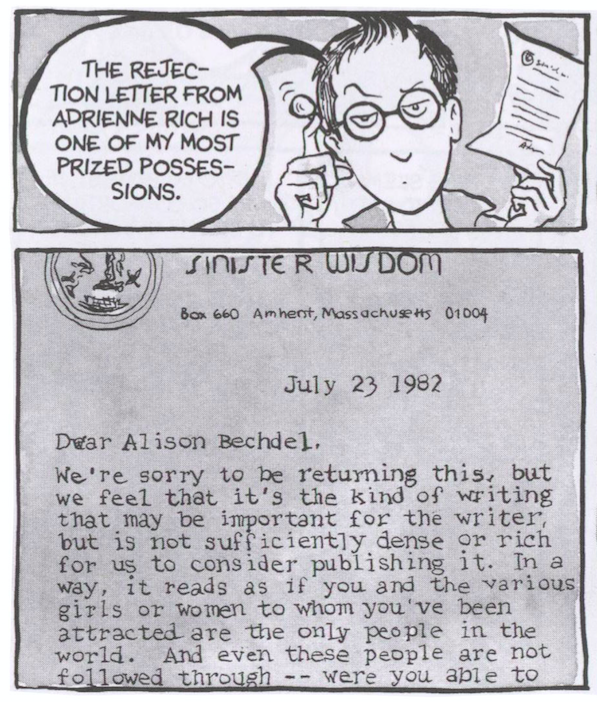 It’s a small but satisfying thing to find (come see glad saw), like two jigsaw pieces clicking together. Here are the two pieces of the letter put in order:

We’re sorry to be returning this, but we feel that it’s the kind of writing that may be important for the writer, but is not sufficiently dense or rich for us to consider publishing it. In a way, it reads as if you and the various women and girls to whom you’ve been attracted are the only people in the world. And even these people are not followed through — were you able to

at a rather superficial level. Even for yourself, I think it would be useful to go back and ask yourself some real questions as to the meaning of each incident, and its context.

I hope this is helpful. Don’t be put off, or discouraged. Writing is a very long, demanding training, more hard work than luck. Strength to you.

Until next time,
wishing you good baths of darkness,
and strength,
CAAF