In last week’s letter, I talked about notebooking and The Artist’s Way, the creativity self-help book by Julia Cameron that I glommed onto after reading Meaghan O’Connell’s essay about it. Each week, as part of the program, I’ve been taking myself out on ‘artist dates.’ As prescribed by Cameron, these dates are forays out in the world, lasting about two hours or so, with no company and not much of an agenda beyond enjoying yourself. I marched off to my first one in the most dutiful way—I think my to-do list went something like: “Pick up prescription, go on artist date.” Now I look forward to them—they’re funny to me and kind of dear. “I have my artist date tomorrow,” I’ll report to a friend, like “I’m going to the mall to try on berets!” or “I’m going back in time to appear in a softly lit music video from the late ’80s. You’ll know me because I’ll be the one in a torn sweatshirt holding a single red rose.” 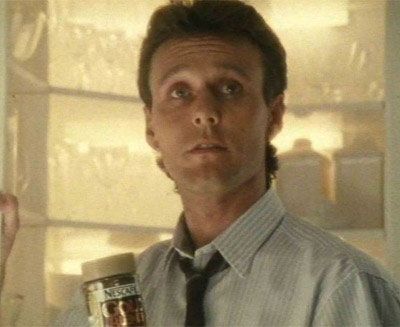 The Artist’s Way was published in 1992, which I recently realized is the same year that Taster’s Choice started its campaign with Anthony Stewart Head in the U.S. (That is, a younger Rupert Giles!) He appeared with Sharan Maughan. If you don’t remember the commercials, they centered on a long-running, simmering romance between two people who shared an extraordinary, charged interest in Taster’s Choice coffee. Sample dialogue, as reported at the time:

“Hello,” she says, in polished British accent.
“I’m sorry to bother you but I’m having a dinner party and . . . (batting her eyelashes) I’ve run out of coffee.”
He offers her Taster’s Choice, saying: “It’s a very sophisticated coffee.”
She tells him that her guests have “very sophisticated taste.”
“Do they?” he murmurs.
“Yessssss,” she breathes.

For my first artist date, I went to the Dillard’s department store near my house and smelled all the perfumes at the make-up counter. That was the mission: Every single perfume. As I said, I scooted into this one feeling stiff and self-conscious: “Can I help you with anything?” “Uh, no thanks… I’m on an artist date.” But it was so fun! I really spritzed and sniffed the holy hell out of some perfume. Another time, I visited a little country graveyard I’d noticed driving home from a friend’s once and had always meant to circle back to (on a hilltop, 1875-ish “Here lies Minyard Earwood”-type gravestones). That sort of thing. Before the program’s twelve weeks are up, I also plan to go to a matinee and eat a pound of Twizzlers sitting by myself in the dark.

When Amy Cuddy’s TED Talk about the “power pose” came out a few years ago, I remember noticing that when she demonstrated the body language of feeling powerless—curled up, hunched—it looked a lot like someone with poor posture working at a laptop. That would make writing the anti-power pose. (She only left out the poor little T-rex arms clumping at the keys.) I can’t remember where we are with the science of “power posing” now; has the research been discredited or have we doubled down on it? Whichever it is, it certainly feels true that the physical pose of writing can seep into your mental experience of it, that as you start to feel passive and slouched physically, you start to feel crumpled mentally too (“Why You Feel Gross”: a TED Talk). This is obvious—and yet when I’m working I often do little to offset it. I’ve been enjoying the artist dates for lots of reasons, but one has been that getting up, going out into the world and roving around, has been a good gestalt to re-align all that, to help shift from feeling passive back to active. 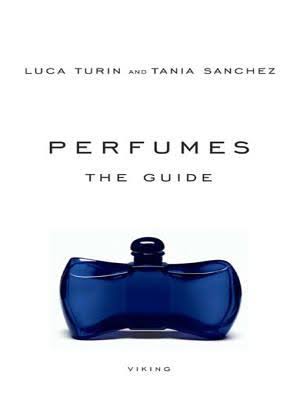 The perfume-counter artist date reminded me of the book Perfumes: The A-Z Guide by Luca Turin and Tania Sanchez. I hadn’t looked at my copy in a while and dug it back out this weekend. It’s such a splendid, elegant book, like a master class in paying attention and trusting in your own line of mental association. The pans are entertaining but I love the rave descriptions too. Here’s a smattering of lines from different entries (initials to show who wrote which)—I feel like it’d be pretty easy to get 100 novels out of these.

New York Thing (Bond No. 9): One of these pale but powerful peony things, evoking those moments when you’re not sure whether the restaurant has put lemon in the tap water or if their dishwasher failed to rinse all the soap out of your glass. (TS)

White Linen: … Lauder’s personal favorite (according to the company) is a naconincal expression of the American ideal of sex appeal: squeaky clean, healthy, depilated and exfoliated, well rested and ready for the day. … (TS)

Coco Mademoiselle: These fragrances are as difficult to tell apart as the ladies at a Scala first night: all tan, makeup, and hair. (LT)

Prince Matchabelli’s Wind Song: I had naively assumed for years that Prince Matchabelli was the pure invention of a marketing executive with a poor grasp of Italian. I was wrong, of course: Prince George V. Matchabelli (1885-1935) was the genuine article, a Georgian aristocrat and amateur chemist who started his own perfume firm in 1924. (LT)

And then this lovely, knowledgeable bit, describing a four-star perfume:

Alliage by Estee Lauder: In the realm of materials that smell green, galbanum resin is the odd man out. Instead of fresh, sharp, and vegetal, it smells chalky and bittersweet, with a poisonous, cold, shadowed character, reminiscent sometimes of dark chocolate, sometimes of old wood. In composition, it can serve as air-conditioning: in the original Vent Vert, a March wind; in Chanel No. 19, the cold shoulder of an ice queen. … (TS)

Beware The Grifters Of Capri

And finally, here’s a cautionary perfume story from a New York Times interview with Molly Ringwald about her beauty routine last year. 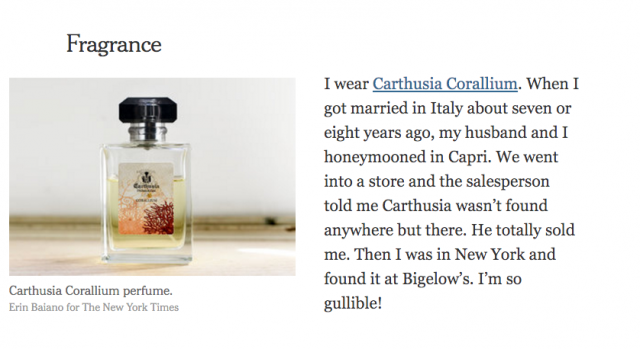 Yours until Thursday,
with a poisonous, cold, shadowed character,
CAAF