After I graduated from college, I didn’t know what to do with myself and so, when my friend Maria called me up to say that she and our friend Rachel had found a house in Austin and did I want to move in too and by the way the city was full of cute long-haired boys, I loaded up my car and went. It was 1993. Slacker had just come out and it felt like everyone was packing up their cars and moving to Austin. Rachel, Maria, and I lived in a lopsided little house off South Lamar, across the street from Martinez Brothers Taxidermy. Lopsided couch on the porch. Lopsided kitchen with a buckled linoleum floor that could never be satisfactorily mopped clean, decorated with Maria’s enormous posters of the band Slayer. Tiny lopsided bathroom full of back issues of Rollerderby and On Our Backs. My room was a converted garage with an iffy lopsided roof over it so that, in winter, I’d wake up many mornings with hard bright spangles of frost on my blankets. I got a temp job with a mortgage company. I adopted a dog, Sid, and walked her up and down Lamar in the humid dusk when I got off work. We gave lots of parties at the house and at least a few times, when I’d go to look for Sid, I’d find her up a tree in the backyard in the arms of a couple punk rock guys in our circle. Like that was these guys’ thing: take the dog, whisk up a tree in the backyard, and spend the rest of the party perched up high, like a couple of midnight crows in leather jackets. I read lots of Philip K. Dick—enough that I still associate his novels with coming out of a dark coffeehouse to hard Austin sunlight—and discovered Barbara Pym and started writing a Pymian novel about a temp worker who has a crush on a beautiful long-haired poet but daren’t speak to him or invite him to one of her parties where, if he’d come, he’d have been absolutely free to climb up one of the trees in the backyard, too.

I’m trying to remember if I had ambitions at this time, beyond photocopying mortgage documents for long dizzying hours. My first thought is no: not beyond the Pymian novel. But that isn’t true—I did. I just had no idea where the bridge was that would take me from where I was to that future (editor in Manhattan but living in Brooklyn, with a nice dogwalker who would take Sid out at lunch).

I’m recollecting all this because I’m in Austin for the weekend, visiting Maria and a few other friends of ours from college. The friends are staying in a big house on Duval, and I’m staying in a wee casita a few blocks away. The neighborhood is Hyde Park and it’s lovely, with lots of gardens and a sense of liberal Sunday-morning amplitude even on weekdays; and I can tell we’ve all reached a certain age because it’s obvious in conversation that each of us has covertly checked Zillow to see if we could afford to live here (“hmm, but what about one of the smaller Craftsman houses?”). 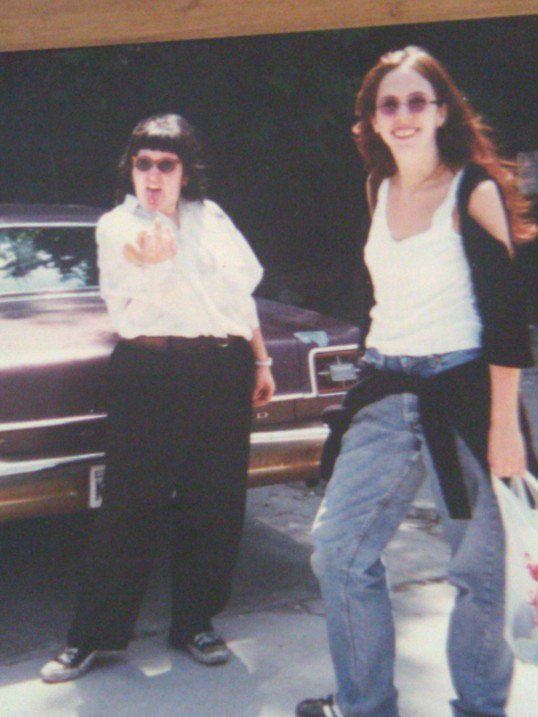 It’s my first time back since 1995, and yesterday Maria, who’s returned here after living in Las Vegas for a while, picked me up so we could field trip around to our old haunts. Ninety-five percent of them are no longer there. The gym where I learned how to box, Big Steve’s, with its wall of Polaroids of Big Steve standing like a white-haired muscular gnome beside Ann Richards and other Austin royalty of yesteryear? Torn down and a Shake Shack built. The coffee house Flipnotics, where we used to run into Charlie Sexton. Maria: “It’s a kava bar now.” The bar the Horseshoe, a block up from our old house. “It closed two years ago. I went in the last week it was open, and it smelled like despair and downward mobility.”

The tour wasn’t depressing—I already knew Austin had radically changed, grown shiny and prosperous, and it was too fun to be riding around with Maria again—but it was disorienting.

“But look!” Maria said, just in case I was getting blue, “Martinez Brothers Taxidermy is still there!”

We reached our destination, our old house on Oxford Avenue. It took us a minute to pick out the house, all of the houses on the block looked so cute and freshly painted. None of them looked lumpy or lopsided or like the kind of house where you’d wake up in winter to find hard spangles of frost on your blankets.

“It’s that one,” I said, pointing. “Remember, it had the converted garage.” You could tell people were home so we didn’t get out to walk around, but stayed parked in front (semi-creepy instead of full creepy). I asked Maria if she remembered how it felt walking in the backyard in summer, how the scorched grass there would scratch and bite at your ankles. She said yes and then: “Do you remember the graveyard behind the house?” I didn’t. It seemed ludicrous that there’d even been a graveyard associated with this house, crammed at it was near the edge of Lamar. And then I remembered. The backyard had stretched behind the house in a long shoebox and, if you ranged back far enough, with the scorched grass crunching under your feet, past the trees where the punk rock guys liked to perch, past the lopsided tool shed, and looked over a tangle of tall weeds, there had indeed been a small graveyard there, the property of a nearby church. I remember laughing the first time I saw it, as something we had collectively with sheer Gothic Brontëan force of will conjured there, to sit behind our house in Texas.

Maria and I sat looking at the house, and I hopped out and took one squinting selfie. Had the house ever been as lopsided as I remembered it, or had they fixed the foundation? I somehow knew that if we did get out of the car and gone around to the backyard, the grass there would now be green and cushiony and soft, the tool shed gone, the tangle of high weeds removed, and if it was still there, the graveyard behind it would be clean and neat, all the gravestones sitting at perfect right angles.

Is Your Writing Life In Need Of Some Bibbidi-Bobbidi-Do?

Wanting to kickstart a writing project this spring and crave some one-on-one editorial support as you go? Find out more about the Hocus Pocus Beast Retreat I’m hosting here. Right now there are four spots left, and registration closes March 14th.

Until next time,
may what’s up in that tree always be a pleasant surprise,
CAAF