Let us talk of Zadie Smith back in the beginning, the year 2000, when we were young and buoyant and so was the internet and Smith had just published her first novel, White Teeth, at age 24. The next couple Black Cardigan letters will be a dive into the novel itself, but I’ve had an entertaining time looking up the original articles and publicity surrounding it (there was a storm of it)—and wanted to share some of it. There was a lot I’d forgotten. Or is funnier now, viewed from this distance, or more illuminating.

An example of something I’d forgotten: That A Heartbreaking Work of Staggering Genius had just come out too and was enjoying a dual reign of yoked ubiquity. It’s mentioned in many of the White Teeth reviews, “two exciting debut authors” and “here’s the stuff the bright young things are writing,” and it brought back the hardcover of A Heartbreaking Work as an artifact of that year: The red drape of the stage curtain on the cover, the opalescent sky behind it, where I was when I was reading the book. Besides Dave Eggers, other authors frequently mentioned: Salman Rushdie (partly because he blurbed White Teeth), Nabokov (usually Smith’s insertion, when asked what authors she likes or as an allusion), Martin Amis, DFW, DeLillo, Kazuo Ishiguro, and… Charles Dickens. Very few women except for George Eliot (again introduced into the conversation by Smith herself). 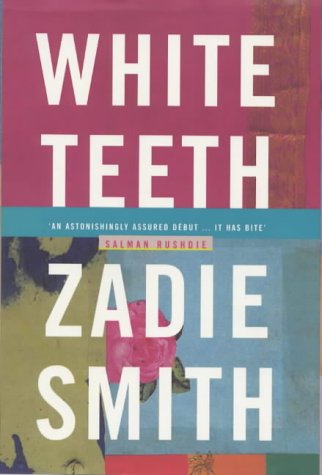 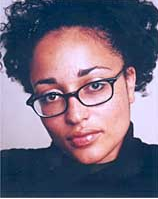 So here we go, fourteen items telling the story of Zadie Smith’s White Teeth back in the beginning.

1. The novel came out in Britain first, in 1999. This Guardian piece does a nice rundown of the original reception and the hype attached as well as reminding everyone that Smith had received a big advance for the book, which is always interesting to read about.

In a lot of the interviews Smith gave during this period (you’ll see below), she was often dismissive of White Teeth and its “try-hard-ness” — its obvious literary ambitions. At the time I remember this striking me as… perhaps sincere but also, you know, smart stage management. It made for good quote: “Author says own book is rubbish.” But in this interview snippet, she links that try-hard-ness, and her distaste for it, to her experiences as a child in a way that I think is important to understanding her other remarks—so light, so adroit, so dismissive—more:

2. Excerpt from White Teeth published in Granta in 1999 as the story “The Waiter’s Wife.”

3. “‘If you live in a country that tells you that you have an ‘alternative lifestyle’ by virtue of your skin color, it can feel very constricting,’” says Zadie Smith, a 24-year-old Londoner whose mother is Jamaican and whose father is British.”

Quote from a January 2000 issue of Publisher’s Weekly, in advance of White Teeth’s publication stateside. From the same piece, the novel’s origin story: written while Smith was an undergrad at Cambridge; repped by Georgia Garrett at Andrew Wylie; “fierce bidding war” (again, always interesting); and nabbed in the U.S. by Ann Godoff at Random House. 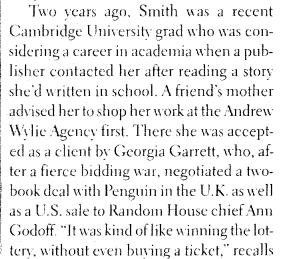 The write-up goes on to say that Smith “has written steadily since childhood but had no designs on a writing career.” From which I can only gather that Publishers Weekly was trying to make its readers hate Zadie Smith. 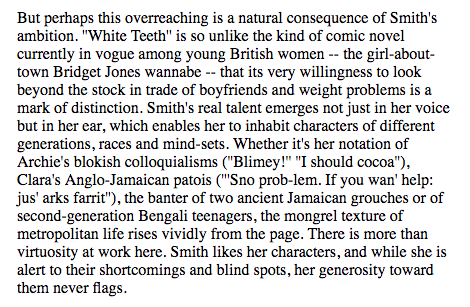 The “but” to the “but” paragraph of the NYTBR’s review of the book, written by Anthony Quinn, which, having critiqued some of the book’s plotting in the previous graf, praises it here for its “willingness to look beyond the stock in trade of boyfriends and weight problems.” (I won’t comment but I will catch your eye here and make rich and significant eye contact on behalf of Smith (not that she needs it) as well as books about weight problems and boyfriends as well as the other comic novels by British women that were out at this time and get elided here. It’s one motherfucking complicated glance I’m throwing your way, in other words.) Also praised in that paragraph: the novel’s generosity toward its characters and Smith’s amazing ear for dialogue.

The review ran in the Book Review alongside this fun interview, conducted by Sarah Lyall over a lunch of “soup and a salad, and cigarettes.” (Lunch of the early aughts!) Here’s a bit about Autograph Man, then in progress:

I enjoy how whatever kind of book a writer just wrote, they are determined that the next one will be different. So different.

6. Smith’s own, famous self-review of White Teeth, with which every subsequent review had to reckon, as quoted in a May 2000 Harper’s Bazaar profile written by Laura Winters.

“Photo of the author” from that same profile featuring a great leather jacket. Note the mentions of Dickens, Rushdie, and Eggers threading through the copy. 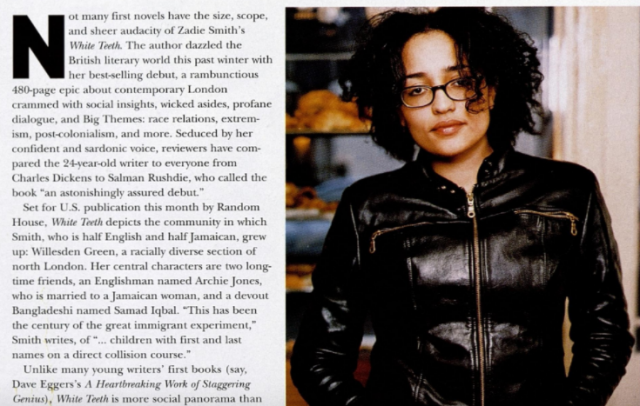 7-10. James Wood’s review of White Teeth charging it as chief exhibit in the case against “a new genre: hysterical realism.” This was such a book blogger’s paradise of a kerfuffle at the time, and I’d forgotten all about it.

• Wood’s initial essay on White Teeth for The New Republic where he introduces “hysterical realism” as a term and groups the novel with such other contemporary novels as Rushdie’s The Ground Beneath Her Feet, Mason & Dixon, Underworld, and Infinite Jest. 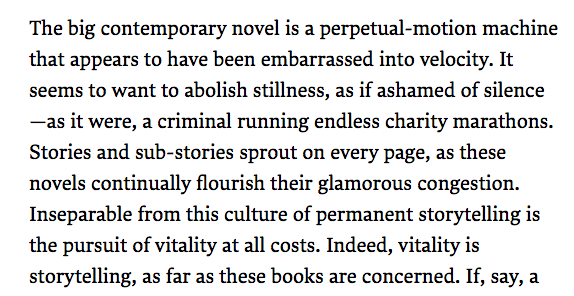 • He then went on about it some more in The Guardian the following year, in October 2001, saying that after the events of September 11, it was time for the novel to find a meaningful ground beyond either hysterical realism and social realism.

• Smith’s response, published a week after.

• A coda from 2012: Wood’s effusive praise for NW, Smith’s fourth novel, in which he praises her as a “great urban realist.” (Time, time, time—it changes everything.) 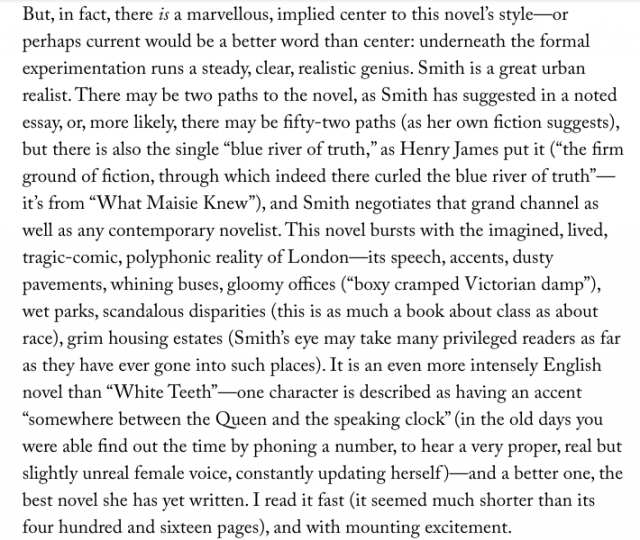 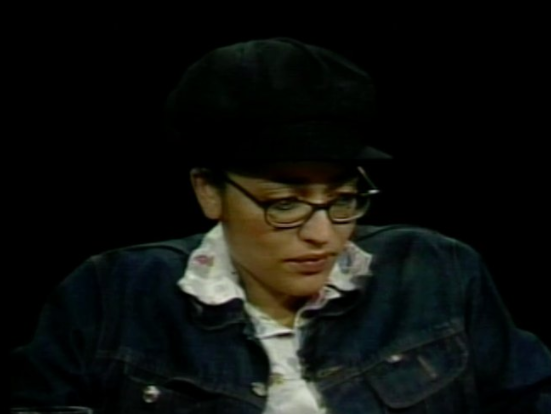 Smith’s first appearance on Charlie Rose, with thanks to Meaghan O’Connell’s twitter feed for the reminder of it. Highly recommended, especially if you delight in major authors squirming and looking young and deeply uncomfortable. (Personally, my favorite genre of Charlie Rose clips.) Lots of good bits, including about her desire growing up to be a tap-dancing, song-and-dance star of movie musicals—it’s super charming to watch her talk about.

12. Remember when I said about the internet being young? Very little brings that back to me so much as this old piece by Smith, published on Eyeshot, about her writing tour for White Teeth. I’ve quoted this bit before but here she is, drinking bad airport coffee with Lorrie Moore and talking about David Foster Wallace, like a mini-literary advert for 2001:

13. From a great 2011 Harper’s interview with Gemma Sieff where Smith talks about an interview she did with Eminem in 2003 (excerpted here), and about the affinities she felt with him at the time, as someone “coming at my tradition from outside.” 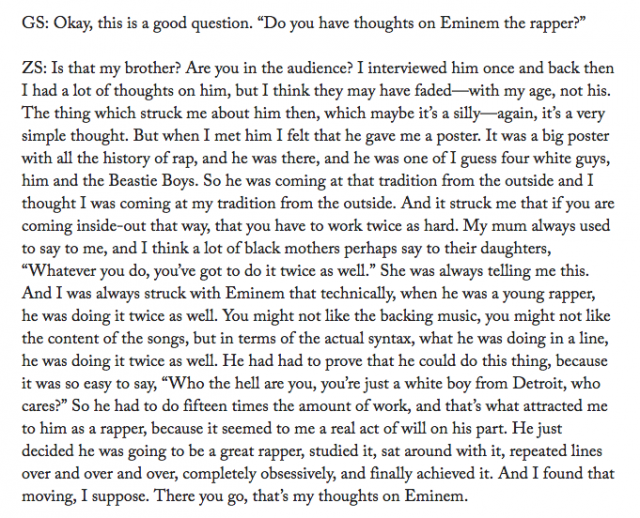 14. If you follow only one Zadie Smith link from today’s letter, I urge it to be to read (or reread) her 2008 essay, “Dead Man Laughing,” about her father’s death. Such a stupendous piece, and relevant here as it touches on the distance her Cambridge education and the publication of White Teeth (and all the money that came with it) opened up between her and her dad. Then there’s this nice bit about him and the character of Archie Jones:

THE SEPTEMBER RETURN OF BOOK BEAST!

Back in May, I launched Book Beast, a seven-month program designed to help writers make major progress on their books. I’ve been enjoying it hugely—as an editor, I love working closely with writers as they step along with their projects, and I put together Book Beast to allow for that kind of relationship, with lots of ongoing guidance and support as you go. So I’m happy to announce that I’ll be offering Book Beast again starting this September! It starts September 1 and ends at the close of March, so will be like a short exciting school year of zooming forward.

It filled up quickly last time. There are fewer slots available this round, only a handful, as the first (wonderful) crew is still going, and I’ll be offering an Early Beast discount of 10% to the first two to sign up. Learn more here.

Until next time,
wishing you a win at the lottery, whether or not you’ve bought a ticket,
CAAF

p.s. If you haven’t already subscribed to this newsletter and would like to, go here.
—
Carrie Frye
Black Cardigan Edit