A reminder that the current theme of the Black Cardigan letter is Beginnings, and it started with a focus on Henry James’s The Portrait of a Lady: some sketches of the author; the circumstances of his writing the novel, which was his first big book; and a look at its first chapter. Before we move on (Zadie Smith is next!), a handful of fun stray things:

1. One reason I wanted to do this novel is I wanted an excuse to research Madame Merle. I was wondering if James had drawn on anyone specific in his circle in forming her character (and if so, I wanted to read a biography of that person). I didn’t find anything, alas, beyond a reminder that a “merle” is a type of blackbird. Still, I did find this funny note about a source for the character of Henrietta Stackpole, the outspoken American journalist.

In defending the Stackpole character to his editor at The Atlantic, James wrote that she wasn’t “I think really exaggerated—but 99 readers out of 100 will think her so: which amounts to the same thing. She is the result of an impression made upon me by a variety of encounters and acquaintances during the last few years.”

In Leon Edel’s biography of James (I’m reading the abridged one), Edel points specifically to a “Miss Hilliard, whom [his brother] William sent to him shortly after Henry had moved to London.” Here is how Henry described her in a letter:

I have got to go and see your—excuse me I must say—accursed friend Miss Hilliard, who has turned up here and writes me a note every three days, appointing an interview. I do what I can; but she will certainly tell you that I neglect her horribly. Do you admire her, particularly? She is, I suppose, a very honorable specimen of her type; but the type—literary spinster, sailing into-your-intimacy-American-hotel-piazza type—doesn’t bear somehow the mellow light of the old world.

(Obviously ich bein literary spinster, but I enjoy the irritability of this brother-to-brother letter.)

2. Last time I read Portrait of the Lady, the Henrietta Stackpole character drove me bananas. This time through I found myself enjoying her more—especially her effects on other people. There is one scene where she is seated beside poor Lord Warburton, Isabella Archer’s urbane super-polite suitor, at dinner and she has him so on his heels as she’s grilling him with questions about “if the aristocracy’s not splendid, what’s the point of them?” that he finally says something like, “Won’t you have a potato?” to change the subject. And it’s such a sad funny Jamesian little deflection. “Won’t you have a potato????”

Meanwhile, Lord Warburton’s placid sister is “preoccupied” with Stackpole too, “… upon whom her eyes constantly rested in a manner suggesting a conflict between deep alienation and yearning wonder.”

(The other weekend, my dog was with me as we babysat a near-one year old who was absolutely hauling ass around the house in one of those white-trayed walkers and the dog had EXACTLY THAT SAME EXPRESSION on her face the whole time.)

3. I’ve been meaning to recommend this nice little book of quotes for the Henry James fanciers among you. It has a foreword by Michael Gorra, who wrote Portrait of a Novel, which I’ve mentioned in these James-themed letters a couple times.

4. And finally, three lists of names from Henry James’s notebooks in the lead up to his entries on Portrait. Some you will recognize:

If you are currently on the hunt for a character name, “Tagus Short” and “Lucky Da Costa” have great rings/ could probably headline their own books (Tagus! In bookstores, May 2019).

Bonus photo: A dog and a baby in a walker. 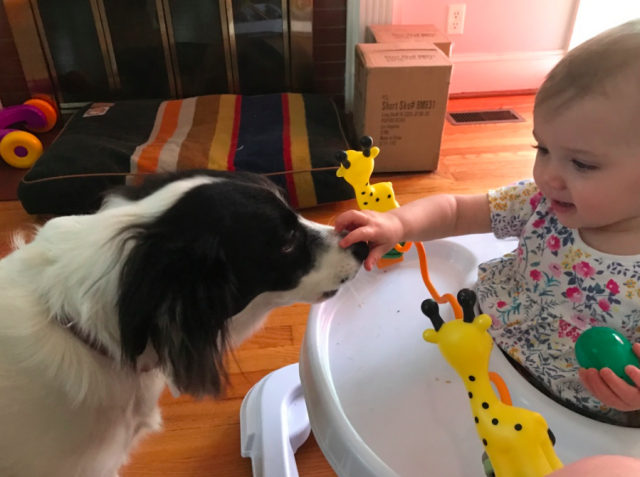 Until next time,
hoping no accursed friends of your brother darken your door,
CAAF

p.s. If you aren’t subscribed to this newsletter and would like to be, go here.