I was rereading the beginning of The Portrait of a Lady last night and one particular thing leapt out. The first chapter starts with the Touchetts, father Daniel and son Ralph, having tea on the lawn of Gardencourt with their friend Lord Warburton. Isabel Archer doesn’t come in until chapter 2, and while her arrival is anticipated in that first chapter, what I noticed was how meandering the conversation is before it circles around to “our American relation whom we’ve never met is on her way here, I wonder what she’s like, and, Lord Warburton, I forbid you to marry her” (rough paraphrase). I counted and there were at least three times before that point where James could have, if he’d wanted, pushed the men’s conversation toward the topic of Isabel without much of a segue. But instead he keeps the trio chatting about light, slightly dull stuff like whether the senior Touchett, who’s an invalid, should keep the shawl on his legs and Ralph’s health and Lord Warburton’s world weariness—and Lord Warburton hands Touchett Sr. another cup of tea and Touchett Sr. drinks it. And then when Isabel does come in, at the start of Chapter 2, to join the men on the lawn, her first piece of dialogue is, “Is this your little dog, sir?” which is a fairly low-key entrance sentence for a heroine. 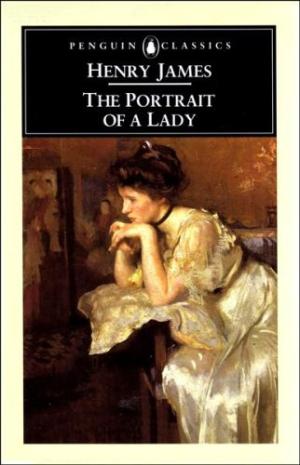 (Cover of my copy so has become what I think Isabel Archer looks like.)

It’s so interesting, this slowness. I was rereading the first chapter because the introduction to my old Penguin copy of Portrait mentions that the writing here is fussy and out of key with the rest of the book. “Elegant prissiness” is the phrase used (quoting an earlier James scholar), and the novel’s first sentence —”Under certain circumstances there are few hours in life more agreeable than the hour dedicated to the ceremony known as afternoon tea”—is highlighted. A couple theories are trotted out as to whether the fussiness was meant as a purposeful send-up of a certain kind of Victorian novel or whether all of it — the business with the shawl, James’s stiff phrasing in places (“they were not of the sex which is supposed to furnish the regular votaries of the ceremony I have mentioned”)—were a sign of something else, that something else being a galloping case of author nerves.

In the last Black Cardigan letter, I wrote about how, with Portrait, James had set out to write a big book, the one on which he would “make his stand” as an author, and here he was — writing the first chapter of this biggggg book, which he’d announced all over the place and would be mailing off to appear in serial in England and America for more money than he’d ever been paid before. So as the Penguin introduction’s writer, Geoffrey Moore, says, “Could it be that… that James was unsure of himself?” In other words, did he have author stage fright?

As I read, I was seeing whether I agreed. And I came away thinking: I don’t know! (I can project of course and say I WOULD THINK YES HE WAS PROBABLY A LITTLE NERVOUS, and as someone who can also turn formal and “these weren’t the votaries of the ceremony I was expecting” when she’s nervous, I can SYMPATHIZE if that’s what happened). Although it’s true, the chapter doesn’t feel entirely in groove in some places and I was glad to go back and look at that as I’d never noticed it before, with the obvious asterisk that “Henry James not entirely in his groove” is still a bar I think most writers would be more than happy to clear.

Still, as I reread, I found myself admiring the ways in which the chapter does take its time. In particular the three times where James could have—without much of a push—brought the men’s conversation around to Isabel Archer and didn’t. It seems magical to me the more I think of it… that way of taking a breath, then another breath, and then one breath more before you start your plot moving forward. It’s a mark of control and assurance. It struck me as a very un-neurotic way to start, the opposite of coming barking out at the reader with a wild show of technique, asking to be noticed and approved of. And I was thinking what it does, in this scene, is give the reader the time and space to step forward, to join the group on the lawn, in a way that if things started out more zingingly, wouldn’t happen. It allows anticipation to gather.

I’m not advocating that all books start with a slow and fussy tea scene, of course! (“Slow Tea Core was an unexpected direction for the American novel to go in 2017…”) But there does seem some sort of lesson there in the worth of, once in a while, instead of hurtling the action forward as if you’re afraid readers are going to jump out of the car if you slow down for a minute, allowing everyone—your characters, the reader, you as the writer—to take a big breath, have another cup of tea, and then get down to the business of figuring out what’s going on with that mysterious cousin from America who should be showing up at your dinged and lush English estate… any minute now.

• <3: The description of the older Touchett's habitual facial expression of "placid acuteness" and of his son Ralph as having "an ugly, sickly, witty, charming face." • A fun fact courtesy of Michael Gorra's Portrait of a Novel: The Gardencourt of the novel is based on the English estate of Hardwick, and one of the family attached to Hardwick is listed in the Dictionary of National Biography as having died of a “heart attack brought on by the excitement of shooting a stag.” Who among us etc.
• As I’ve been rereading Portrait, I’ve thought several times of this beautiful Sarah Blackwood essay on Isabel Archer’s dead (and absent from the novel) baby.

Until next time,
wishing you, your votaries, and your stag all well and happy,
CAAF