I am [gurgle noise/ clicks refresh on Twitter]. I’m writing this the night before it goes out and keep wondering ahead to what new batshit thing is going to happen while I’m asleep tonight. Or things, plural. I guess we’ll see in the morning!

I have a few poems I wanted to share. I’ve been reading so much poetry lately—the most since I was in college and wanted to be a poet. I don’t know what the new appetite’s about, entirely, except the freaked-out heart wants what the freaked-out heart wants, and the freaked-out heart isn’t afraid of outsize emotions right now. I’ve also been deep into Ursula K. LeGuin, Octavia Butler, and… Henry James. Oh, and coming home from the library with more “current events” nonfiction than I can possibly ever finish as if, if I read enough George Packer and Masha Gessen, I’ll turn into the Miss Marple of our current political situation and SOLVE IT.

But today, some poems. 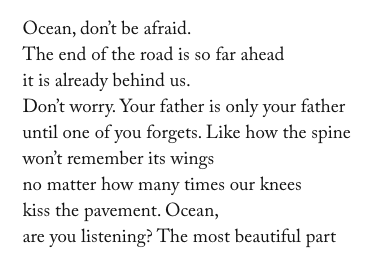 Read the rest here. It’s such a beautiful poem—I like reciting that beginning a lot. (It’s part of the New Earnestness that we can say things like that, isn’t it?) I came across it after seeing a recommendation for Vuong’s book Night Sky With Exit Wounds, which won the Whiting Award last year.

• Next: “Pluto Shits on The Universe” by Fatimah Asghar. New to me before it was pinging around Twitter the other day and completely grand. 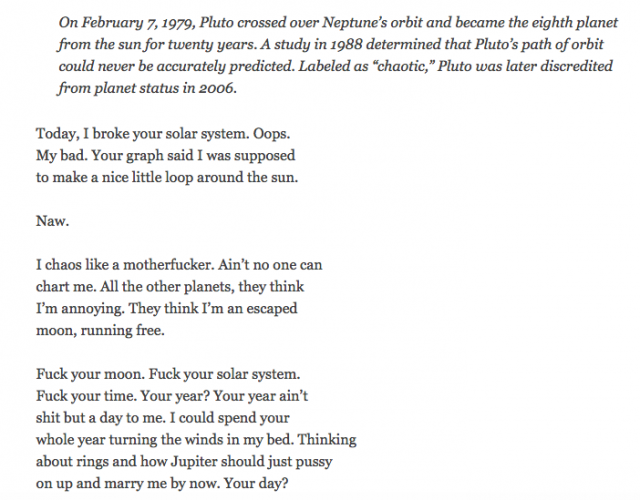 Links to some of Asghar’s other poems are here.

• And then: “Visiting Whitney Plantation” by Rio Cortez. 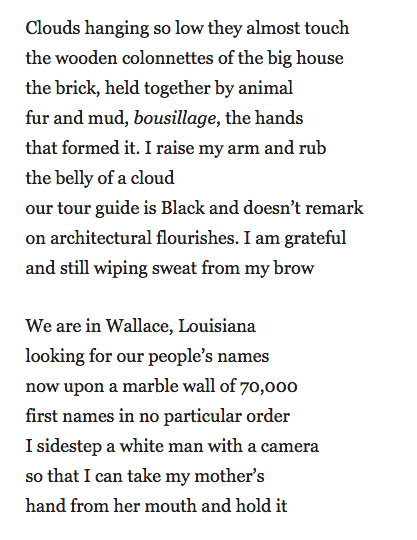 This is one where you really need the other half to appreciate the full shape, which is here—last one of the four. Cortez’s chapbook, I Have Learned to Define a Field as a Space Between Mountains, is for sale here.

I’ve been reading a lot of Matthew Arnold too—and, after ducking him for decades, it turns out I love him and his ambivalent, ghost-ridden soul, but he’s dead and doesn’t need me to do his advance work.

Stray Thought About The Ideal Resistance

The Black Cardigan newsletter is coming up on its one-year anniversary. The first issue was on ideal readers—about how sometimes when you’re stuck writing, it’s because you’ve picked “the wrong Reader to preside over a project.” Usually it’s someone you’d love to impress and who you’ve also decided is impossible to impress. And naturally enough, faced with such an audience, you find you can’t write.

I was thinking about this the other day because I realized that whenever I’ve said something despairing about our current political situation and any actions I’m taking related to it, it’s been as if I’m in conversation with this sort of Hostile Reader. Like some external force has decided to weigh in with how useless what I’m doing is—the calls to my Republican senators, my meeting-going, my marching around—and I’m responding to it. And while this voice isn’t the same one that tells me not to write, it’s a close cousin. It doesn’t tell me I can’t impress it, but it is so reasonable and rational in presenting how small and unimportant I am and how little what I do matters, that it’s just as deadening in its way. And just as 100% not worth listening to.

It helped me to realize that—it makes it easier to ignore the voice and keep on anyway, imperfect and all. If that voice has been in your head too the past weeks, I urge you to give it a wink and an affectionate pat and tell it to go get stuffed.

More in two weeks! Also, my web person (who is also my husband) tells me the exciting Black Cardigan news should be ready to share then too!

Until then,
remember the “end of the road is so far ahead it is already behind us,”
CAAF