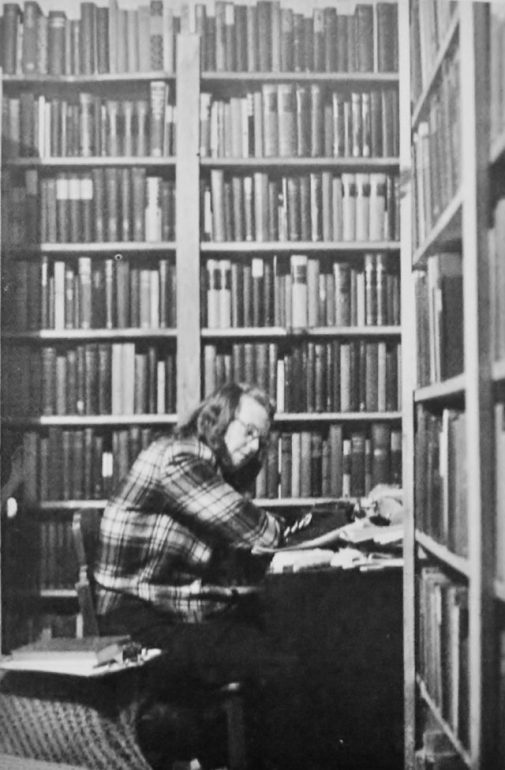 Shirley Jackson in her study. It looks like one of the world’s perfect places, doesn’t it?

Today is Sylvia Plath’s birthday—she would have been 143 if she’d lived. (Just kidding: 84.) I was thinking about her this week and about the time she sent Marianne Moore a packet of her poems to get a reference and Moore returned them with a letter that said, among other things, “Don’t be so grisly.” Forgive me if you’ve already heard me mention that factoid; I never do not find it funny. And now, thanks to A Rather Haunted Life, Ruth Franklin’s (marvelous) new biography of Shirley Jackson, it’s yoked in my head with a critique Shirley Jackson’s mother, Geraldine, gave her about her novels, which was that they had “too many demented girls” in them. Fire, don’t burn. Sylvia, don’t be so grisly. And Shirley, cut it out with all the demented girls. Marianne Moore is wonderful, Shirley Jackson’s mother brought us Shirley Jackson, and yet I think we can all agree, some advice is best left unfollowed.

Jackson’s relationship with her mother was always strained. Geraldine was a wealthy and status-conscious woman. She’d expected a conventional daughter, someone, that is, like her. Instead, she got a fierce, slumping, glasses-wearing changeling, and so for the next near-fifty years—the entirety of Jackson’s life, that is—kept trying to chastise, nudge, reproach, and critique that daughter into something she found more presentable. It’s almost impossible to read Franklin’s book (or Judy Oppenheimer’s earlier biography) without wanting to yell “BACK OFF, GERALDINE!” at some point. Franklin observes how Jackson’s stories are filled with instances where the child has hidden writing away and returns later to find “the lock on the desk broken, the papers out of order. … [Jackson] would later tell her children that she burned all her childhood writing—in front of her mother, to make her feel guilty.”

Which brings me to Jackson’s “Notes for a Young Writer,” which can be found in the collection Come Along With Me. A quote from it appears early on in A Rather Haunted Life, and it was so good and funny it sent me off to reread the essay:

Never forget the grotesque effect of the absolutely wrong words: “He swept her into his arms; ‘I will always love you,’ he giggled. “Top the finished cake with a smear of whipped cream.” “I am not afraid of anything in the world,’ he said thinly.”

Jackson starts out “Notes” by saying that it originated as “a stimulus” to her daughter Sarah (known as Sally as a kid) “who wants to be a writer.” Jackson and her husband, the critic Stanley Hyman, had four children; Sarah was their third. She would have been in her early teens around the time “Notes” was written.

The essay is great—dry and droll and exacting and generous, all at the same time. Its focus is short story writing, and the gist is: Your reader is busy, don’t load down your story with fat or flashbacks, keep it always moving forward. Excellent stuff in there too about characters and dialogue.

Franklin writes that when Jackson delivered the essay as a lecture at NYU she followed it by reading a story of Sarah’s “as if to demonstrate that the advice worked.” I don’t know how Sarah received all this—if she was proud, or overwhelmed and pressured-feeling, or some complicated mixture. Nevertheless, and even though I think Jackson would have been impatient with this kind of sentiment, I find it moving to think about the essay as a mother-to-daughter message that was so different from the one that Jackson herself grew up with: “I take you seriously, here’s everything I know about how stories work, now go write.”

A few other “Notes for a Young Writer” bits:

• “Do not try to puzzle your reader unnecessarily; a puzzled reader is an antagonistic reader.”

• “Every time you use a fancy word your reader is going to turn his head to look at it going by and sometimes he may not turn his head back again.”

• “Also, if your heroine’s hair is golden, call it yellow.”

(Call it yellow, sez Shirley in between puffs on her Pall Mall.)

Shirley Jackson’s Advice On Getting Started

My favorite part, however, comes at the essay’s end. I am going to quote a chunk because, as with Ole Golly’s advice on writing in Harriet the Spy, IT IS GOOD, GOOD ADVICE and well worth keeping handy:

I am not going to try to tell you how to set up a plot. Just remember that primarily, in the story and out of it, you are living in a world of people. A story must have characters in it; work with concrete rather than abstract nouns, and always dress your ideas immediately. Suppose you want to write a story about what you might vaguely think of as “magic.” You will be hopelessly lost, wandering around formlessly in notions of magic and incantations; you will never make any forward progress at all until you turn your idea, ‘magic,’ into a person, someone who wants to do or make or change or act in some way. Once you have your first character you will of course need another to put into opposition, a person in some sense “anti-magic”; when both are working their separate intentions, dragging in other characters as needed, you are well into your story. All you have to do then is write it, paying attention, please, to grammar and punctuation.

And here, in honor of Halloween and because it’s surely one of the novels that Geraldine Jackson objected to on the grounds of it having “too many demented girls,” are the opening two paragraphs of The Haunting Of Hill House. 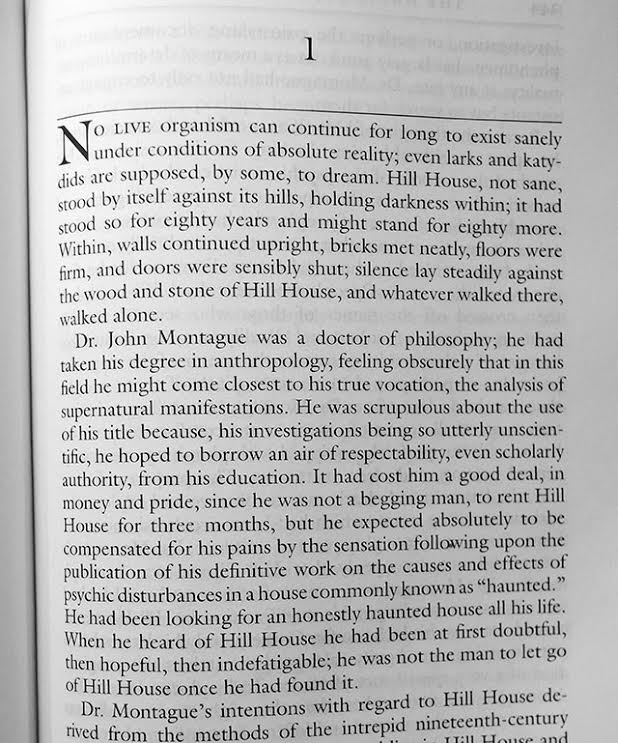 Reading them, you can see with what a firm, sure hand Jackson applies her own techniques: In the story and out of it, you are living in a world of people… dress your ideas immediately, etc. The first paragraph has been rightly lauded all over the place (I especially enjoy this annotation by Benjamin Dreyer), but I like the crisp getting-down-to-business shift the book takes in the second paragraph as well.

• After today, I’ll be sending out this letter every other week instead of weekly. That seems to make sense with the holidays coming up, and I’m doing some hatch-battening here with work on my book. (As the Latin poet Britullus wrote in 84 B.C.: “You wanna live fancy? Live in a big mansion? Party in France? You better work, bitch.”)

The next letter will be Nov. 10… after the election! Hip-hip, hang in there, and vote!

Until then,
I will always love you, she giggled,
CAAF