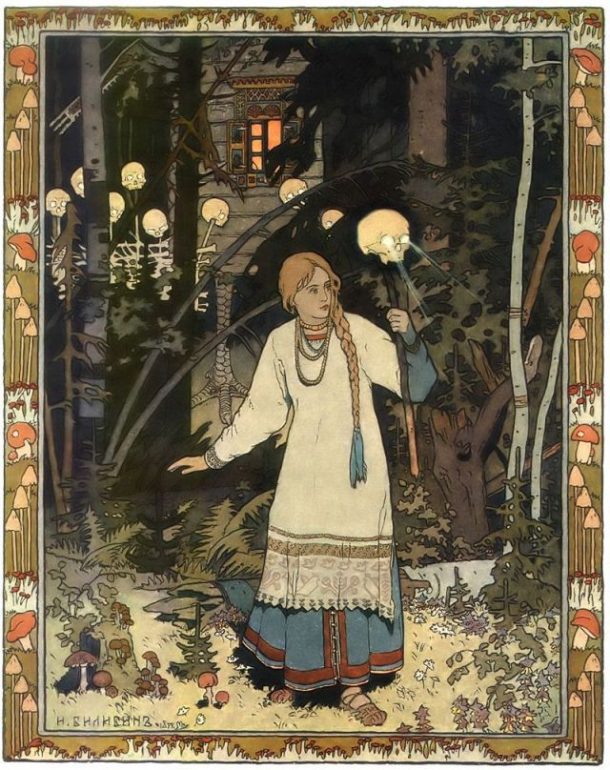 1902 illustration by Ivan Bilibin of the character Vasilisa outside Baba Yaga’s hut. Skulls!

Last week’s letter was about Russian mushroom hunters getting lost in the woods. This week, I wanted to continue along by talking about a personage that you—aka, a possibly lost Russian mushroom hunter—might meet deep in the woods, and that is the witch Baba Yaga. If you don’t know her, Baba Yaga is a character from Russian folk tales—a witch who lives in a hut that stands on chicken legs and who flies around the forest in her mortar. If you meet her, she may roast you in her oven, or she may grind your bones. Or she may give you pretty dresses and help you with what you seek. It depends which folk tale you’ve wandered into.

I’ve been thinking about her a lot lately as a figure of disruption. A witchly shock to the system. When we’re lost in the woods, we circle. Round and round: “We’ve been here before. I recognize that tree.” If you wander up to Baba Yaga’s hut, knock on the door, and ask for help, for better or worse, roasted bones or pretty dresses, your circling is going to come to an end. Your story is going to have to move forward.

In Dancing in the Flames, Jungian analysts Marion Woodman and Elinor Dickson describe how, if you appear at Baba Yaga’s door, she will ask you a series of questions “to determine if your search is legitimate or not.” Then:

[S]he has one more question, “Do you come here of your own free will, or do you come by compulsion?” or “Have you come to do deeds, doughty youth, or to flee from deeds?”

In other words, neither answer is correct—and both are. As Woodman and Dickson say:

The right answer for the Baba Yaga would go something like this, “I am here seventy-five percent of my own free will, sixty-five percent by compulsion.”

In their book Woodman and Dickson present Baba Yaga as a figure who, in her confoundingness and ambiguities, forces her visitors to move past a dualistic, “either/or” view of the world. To get to a place where, when you add it all up, it equals 140%. Baba Yaga math.

Baba Yaga And The Stories We Tell Ourselves About Ourselves

This view of Baba Yaga as a complicator seems useful, too, when it comes to the stories we tell ourselves about how, if we’re feeling lost in the woods, we ended up there. Here I’m not talking about the revelations of fresh, hard-won self-understanding. I’m talking instead about the stories we circle to no good end. You know the kind. The gnawing, righteous, disgruntled kind, where you play a role that is either misunderstood, overlooked, or unloved. Or the self-narration that tells you continual terrible things about yourself. Or when you keep returning to some botched point in your past to go back over the ground as a sort of do-over. Or all of the above at once. Earlier this year, I wrote about this sort of obsessive mental circling with the character of Miss Havisham in Great Expectations and her circuits with Pip around the wedding cake in her hall:

Miss Havisham circles the moldering wedding cake the same way her mind circles around the memory of Compeyson’s betrayal. Up and down and around. I would guess that many of us have had at least one moldering wedding cake (or two) that has set itself up on a long table in the chamber of our minds and around which we have put in our time circling. It’s the nature of moldering-cake thoughts that we sometimes want to be done with them, with all our being; while other times we may luxuriate in them in an excess of self-lacerating splendor. In fits of wishful thinking, we may delude ourselves into thinking the cake is not moldering after all and might still be joyfully eaten. Still other times we may think we are done with these thoughts, at last, and have wisely moved on and then—whoops!—there we are, circling that old cake again. “Why didn’t they love me?” “Maybe if I had…” On and on, over and over. Flit flit, skitter skitter, scurry scurry, round Miss Havisham’s dark room.

I’ve been thinking about this tendency a lot the past couple years. I think it’s a function of being in my mid 40s and seeing how—I don’t know how to put this exactly—how easy it would be, when feeling lost or unhappy, for my face to freeze that way.

This is what attracts me to Woodman and Dickson’s interpretation of Baba Yaga and her complicating 140% math. You might be the virtuous hero of your own circling, lost-in-the-woods narrative. You might be its unlovable villain. It doesn’t matter. What matters is that, if you’re knocking at Baba Yaga’s door, you are, on some level, tired of the story and ready to let it go. And letting it go means, in part, acknowledging to yourself, in answer to the old witch’s questions, that while there may be 65% truth to the version of events you feel explains how you ended up here, in these woods and stuck on this quest, there may also be 75% falseness. And 39%, ultimately, “who knows?”

I don’t have any magic ways one accomplishes this story-of-myself dismantling, by the way. I can say I’ve found therapy wonderful and helpful, like having my own, less scary Baba Yaga. It’s what I’d wish for everyone who wanted it to have. I also have another Baba Yaga-related technique I’ve been using that I find amusing that I’ll share in next week’s letter. If any of this letter has resonated with you, I’d urge you to pursue whatever works—therapy, meditation, yoga, notebooking.

The hope is that if you work on this stuff—as gently but persistently as you can—that when you leave the witch’s hut and resume your quest through the woods you will be able to see, really see, what’s there in front of you when you’re not so distracted by telling yourself old stories: A trail. Pine needles on the ground. Speckles of sky overhead. A line of sight past that tree you recognize to maybe one you don’t.

Until next Thursday,
never doubting that you have come here to do doughty deeds,
CAAF