Last fall, as I was putting on my shoes after a yoga class, I overheard two people talking about where you could hunt for mushrooms nearby. One of the women said that there was a patch of [type of mushroom I hadn’t heard of and can’t remember] but it was deep in the woods and the location was a big secret. “They don’t want anyone to know where it is,” she said, in a way that managed to be portentous and surface casual and convey that she’d been there, all at once. It felt a little like hearing about a club at school you’re not interested in joining but nevertheless enjoy hearing a little about the initiation and rules for. Like Rory Gilmore learning about the Life & Death Brigade, except instead of a secret society at Yale, this club was some hippies with a pick-up truck. 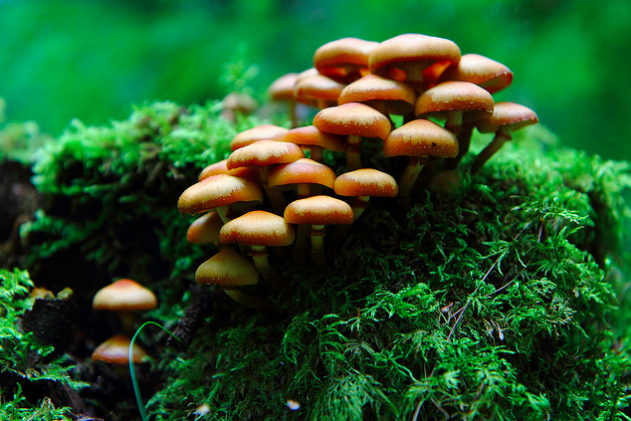 Some of the fungus among us. Photo by Kalle Gustafsson.

I was reminded of it this week because I wanted to share an old favorite New York Times article written by Ellen Barry about mushroom hunters in Russia. It was originally published in October 2009, and this is how it starts:

Earlier this month, a sodden and unshaven man emerged from the woods near the southern Russian village of Goryachy Klyuch, telling rescuers he spent three nights perched in trees to get away from jackals.

The man (now forever in the Times archives as Sodden, Unshaven Man) had gone into the woods looking for mushrooms and gotten lost. Mushroom season in Russia happens late summer through mid October, so this is a frequent occurrence this time of year, apparently, as, engrossed in their search, hunters will go deeper and deeper into the woods, eyes combing the ground, until they can’t find their way back out. It sounds like being under a kind of enchantment. Not everyone returns: “Aleksandr Zmanovsky, who leads a rescue team near Bratsk, said nearly every year someone goes into the wild and is never found — often because of bears, who so thoroughly bury the remains of a body that ‘we will never find anything.'”

The article closes with the tale of a woman named Irina Fedyno who returned home “24 days after she’d gone out mushroom picking.” Please enjoy—it’s an entire story of a marriage in five paragraphs, and everything about it is wonderful, up to and including the quotes around “gone on a bender”: 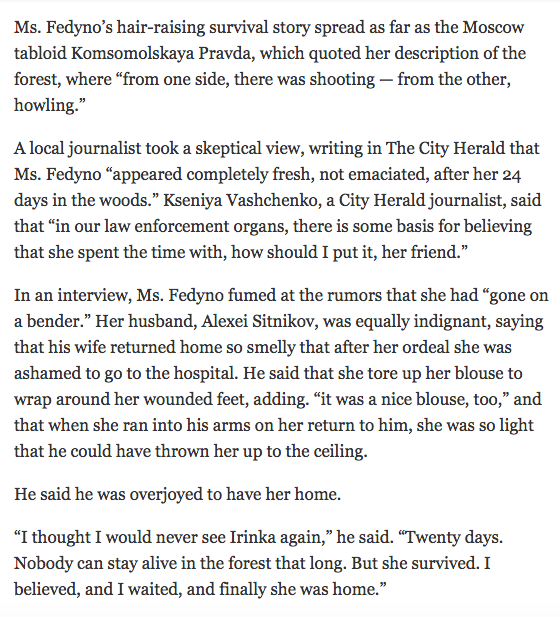 Three Other Great Ones About Mushroom Hunting

• Also enjoyable is this one by Burkhard Bilger, for The New Yorker, about hunters of matsutake mushrooms in Oregon. (On the secretiveness front, Bilger describes how one hunter clears his footsteps after he’s visited a certain patch so people can’t track where he was.)

• Finally, this Times article by Akhil Sharma about his experiences hunting mushrooms in a few different spots near Moscow and St. Petersburg:

A while back I was talking to a friend who’s a jeweler who works another full-time job as well, and she was saying how when she has a day off from her other work, even if she’s been looking forward to getting into her studio to work on her jewelry, she’ll find herself putting it off. Doing stuff in the kitchen, watching something stupid on TV, until it starts to feel ridiculous. Like there’s a force field around the door to the studio keeping her from going in and just sitting down on her bench and starting. I of course loved how close all of this was to writerly procrastination. Once she had gotten through the door, she said, she could work for hours and how she described that sounded a little like the descriptions of the mushroom hunters in the woods—like it’s a kind of enchantment where you look up and it’s gotten dark and you don’t know how it got so late, except that you’ve been content and engrossed by what you’ve been doing. It’s a lovely feeling, and so we were marveling over what it was that sometimes makes us avoid it.

No answers there, by the way! Just the hope that, if that’s something that’s happening for you right now, the mushroom hunters might be a helpful metaphor or encouragement to let yourself separate from the world and go into the woods sometime soon, going from tree to tree and paying close attention to what you see—and hopefully never getting eaten by jaguars. The more you whisk yourself there, the more it is just an appointment you have to keep, the easier it becomes.

Until next week,
hoping if you have to tear up your blouse to wrap around your feet it’s not the nice one,
CAAF