Alexander Chee tweeted this poem by Adriana Cloud a few weeks ago. It’s from her chapbook Instructions for Building a Wind Chime, which you can order here. 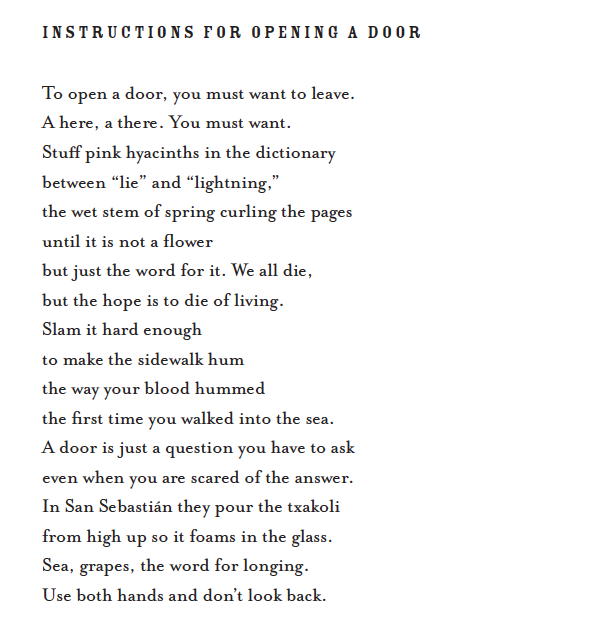 I’ve been thinking a lot about the poem ever since, especially the first line “To open a door, you must want to leave.” There’s a thing that yoga teachers often say at the beginning of class when they encourage you to think about “what no longer serves you” and to try to let it go, at least for the class period. It’s helpful guidance—and I like how that line gets at the difficulties of actually following through on it. “… you must want to leave.” Not just part of you, but all of you. And not because you should want to leave, but because you really want to leave.

There’s that then, what you leave behind when you open a door. But for today’s letter, I wanted to focus on the other part of it, which is where you go once the door’s opened. Here the word “want” in Cloud’s poem seems crucial again: “You must want.” As I noted last week, the theme of this letter for the next couple months is going to be about journeying and adventures and mapping—sometimes in a creative sense, other times real world. Fall seems like a good time of year for it, and so if you’ve had a hankering to get somewhere—that is, to embark on something fun or big or new—I’d encourage you to deliberate on what it is you want from the rest of the year—whether to write, or to read, or to go to, or to clean up, or to volunteer for, or to make happen for yourself. Whatever. If you like, make a list. A giant, grandiose, 100% joyful list of ambitions and goals. Small fun projects, or major daunting-but-exciting ones. Put ’em all down. If the list gets long, pick one or two things from it that leap out at you as most achievable and/or enjoyable. Try to be honest about the “want” part and try, as much as you can, to keep “should” out of it—it’s hard to follow through on things that are powered by “should.” (No “learn German” equivalents, in other words.) I’m suggesting this exercise as something intended to be fun, not guilt-inducing, something to spark you forward and help you remember what it is you want outside of the day-to-day flow and grind of life, enough to put some time and effort into it, and enough to want to reach out for it with both hands.

(Big thanks to Adriana Cloud for permission to include her poem in today’s letter.)

• A favorite Black Cardigan dispatch on the origins of Jane Eyre is over at Longreads this week!

• No letter from me for the next couple weeks but I’ll be back Sept. 15.

Until then,
happy to have spotted you walking in through the out door,
CAAF