I have another installment related to notebooks planned, but I’ve decided to save that for next week’s letter. My plan is to keep the Thursday notes to you short. So instead for today, light word nerd stuff!

The last letter focused on Harriet the Spy. In the book, Harriet’s dad is a television executive, and his favorite word is ‘finks.’ “Fink doctors,” “that mumble, he’s an absolutely inspired fink,” etc. etc. It’s not a word I’ve heard much lately, and it was nice to be reminded of it. Like when someone uses ‘lousy.’ Finks! (The Ngram below shows ‘finks’ in steady circulation, so it might be I’m just not running in the right circles: “We say ‘asshat weasel’ where I’m from.”) Then I was reading Saul Bellow’s Humboldt’s Gift the other night and ‘fink’ showed up there too. Not surprising—there are a gazillion words tumbling through Humboldt—but I’ve also been reading a book that encourages you to see coincidences, even small ones like this one, as synchronicities running through the universe. And I’m amused that if the universe is throwing up a message to me this week, that message is ‘fink.’ Finkity-fink-fink-fink.

The other word for the week I’d gotten a few days before. I was standing in a store, and a woman passed by with a friend.

‘Swivet’ means a nervous flurry or, as my other dictionary puts it, “a state of extreme distress or discomposure” (origin unknown)—I looked it up when I got home, but you would have gotten the meaning from how she said it. As it happened, I wasn’t feeling so hot right then either (strep, antibiotics, no lunch). I was queasy, not nervous, but still. I felt a strong sense of me too, lady as she flurried by. So those are it, this week’s words. Cabbages and kings, finks and swivets. Use them in your travels and prosper. 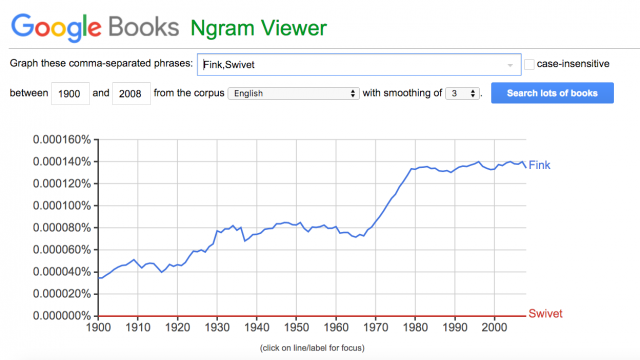