In the summer of 1843, Charlotte Brontë was staying at the school in Brussels where she was both a student and a teacher—at this time, more the latter. Over her time at the Pensionnat, she had developed an unrequited passion for the directrice’s husband, Constantin Héger, and she’d been present as he departed for the seaside with his handsome wife and their young children. The other teachers and the school’s boarders had already left for their own holidays, and Brontë was the only person left remaining except for the cook. Her friends outside the school had left the city too. Summer in the city: everyone who can, leaves. Her relationship with the cook, one suspects, was cordial but necessarily distant, and the cook would have had her sleep quarters in another part of the house. Brontë was alone at nights in the dormitory.

If you’ve read Villette, the contours of this summer term are already familiar. The empty dark echoing hot rooms of the school, the tiny plain Englishwoman fluttering through them like the world’s most anguished moth:

How long were the September days! How silent, how lifeless! How vast and void seemed the desolate premises. … A sorrowful indifference to existence often pressed on me – a despairing resignation to reach betimes the end of all things earthly. Alas! When I had full leisure to look on life as life must be looked on by such as me, I found it but a hopeless desert: tawny sands, with no green field, no palm-tree, no well in view.

If you’ve ever been lonely and heartsick abroad, feeling yourself connected to no one for days on end, it’s an easy scene to identify with. Claire Harman’s biography, Charlotte Brontë: A Fiery Heart, starts with a description of how, as happens to Lucy Snowe in Villette, Brontë, a Protestant, was eventually drawn to a Catholic church and, entering the confessional, poured out some of her “long accumulating, long pent-up pain” (Villette‘s phrase) to the priest there.

Harman’s biography is excellent, by the way; elegant and keenly perceptive, while retaining a nice generosity in its descriptions of people’s actions and motives. Later in it, she returns to that summer and describes how Brontë found herself in that jittery, restless, depressed state where you’re unable to read or focus on anything. Harman notes: “Walking the busy city streets was just as distressing: ‘I know you, living in the country can hardly believe that it is possible life can be monotonous in the centre of a brilliant capital like Brussels,’ she wrote to [her friend Ellen Nussey]; ‘but so it is.'”

For a Brontë, writing would normally have been a comfort and a refuge, but that, too, required a focus that Charlotte didn’t have that summer. She did manage to write a little, however—or at least planned to. Harman shares an outline for a story Brontë started inside a German exercise book. The story was to be a “magazine tale” set 30 to 50 years before in England, have a rural setting, be in the first person, and deal with characters of “Rank—middle.” After the heading for “Subject,” Brontë had written, “Certain remarkable occurrences,” which is a pretty wonderful instance of literary plot TK-ing. Feel free to use it yourself next time you’re stuck in a draft: [Certain remarkable occurrences TK.]

At the back of that same exercise book was this fragment, unrelated to the “magazine story” outline. It reads:

There was once a large house called Gateshead stood not far from a [illeg.] high-road in the North of England—it is gone now every vestige of it, and the site is [replaced?] by a Railway Station. No great loss was the demolition of that said house for it was never a tasteful or picturesque building.

Harman writes, “Charlotte Brontë later said that she always made two or three starts on her novels before settling down, and here we see a very early glimpse of her second novel, Jane Eyre… It’s odd to think Charlotte may have been hatching the story in the long lonely summer at the Pensionnat.”

Here’s the first page of Brontë’s later fair copy of Jane Eyre with the first sentence, “There was no possibility of taking a walk that day,” she’d arrived at after those two or three (or however many) false starts. 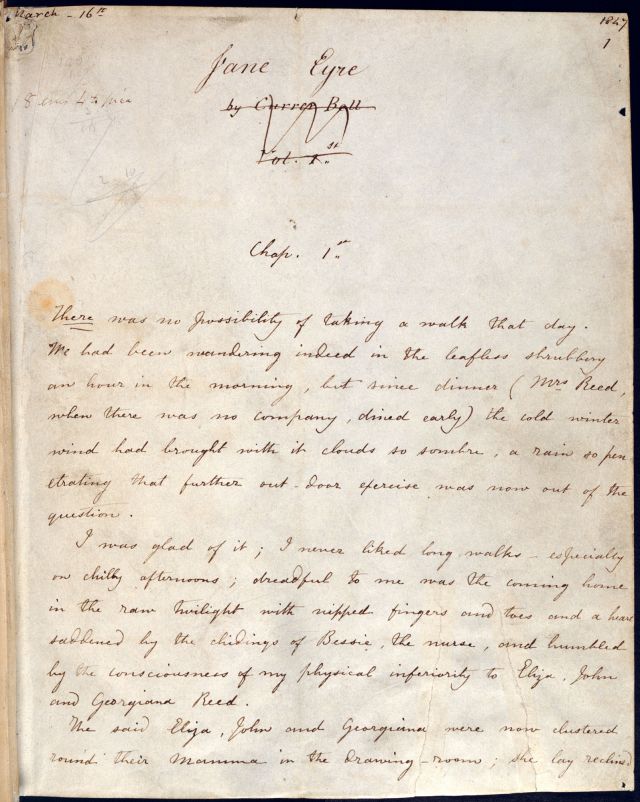 Charlotte Bronte’s fair copy manuscript of Jane Eyre from March 1847. The book was published in October that same year. Courtesy of the British Library.

When I was reading Harman’s biography the other night, that first beginning fragment—”There was once a large house called Gatehead”—gave me goosebumps. I don’t know why. 90% of the reaction was attributable to pure Jane Eyre– Brontë love, of course. 1% probably to the fragment’s echo to “Hill House, not sane, stood by itself against its hills, holding darkness within,” and to the Gateshead of the fragment being a house that, like Manderley, can’t be returned to. (As Thornfield Hall ends up being in the completed Jane Eyre.) The rest of it, though, had something to do with the way the note had been scribbled in the back of the exercise book, with a couple words illegible to even the most diligent of biographers. About how it was off to the side of the main thing that Brontë was working on. One of those stumbling starts on something you make during a long, terrible summer that may come to nothing. Or may not.

• Last week’s letter on Colson Whitehead and his upcoming novel, The Underground Railroad, can now be found over at Longreads!

• Last weekend, I found a project over at Donor’s Choose started by an art teacher at a Baton Rouge elementary school who’s trying to raise money for a traveling art cart for her school. She reports that her budget for art supplies has recently shrunk to $500. If you’d like to chip in, say, $5 or $10 towards the cart, here’s where to go. Likewise, as I type this, the Baton Rouge Legal Defense Fund is still more than $10,000 short of its fundraising goal.