What a sad, heartbreaking week. I wanted to point to Justin Torres’ essay “In Praise of Latin Night at The Queer Club,” if you haven’t already read it—and then give us a break from the more creepy-crawly monster topics we’ve been circling the past few weeks for something gentler.

This week I rewatched Hayao Miyazaki’s Spirited Away. (I trust you’ve seen it, but if you haven’t, YOU ARE IN FOR THE BEST, MOST BEAUTIFUL MOVIE.) There’s a character in it, called No-Face, who I find fascinating. He’s the mysterious, troubling spirit who follows Chihiro, the movie’s protagonist, around. He starts needy, grows monstrous then more monstrous, before eventually finding his way back to some equilibrium. I can see interpreting his arc many, many ways, all of which would be useful to think on. On this viewing he seemed mostly emblematic to me of the gross, jittery feeling you get when you’ve spent too much time on the internet and/or are otherwise feeling off-keel. (Many of the screengrabs here are from a post on The Entertainment Nut that dissects No-Face’s role in the movie.) 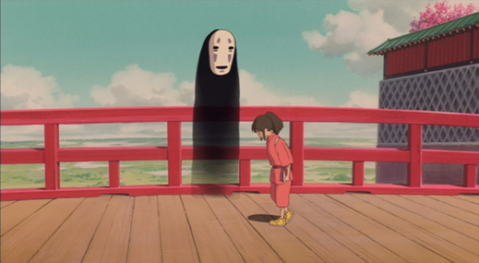 Here he is when Chihiro first notices him on the bridge to the bathhouse. Again, the character’s name is No-Face—that is, he doesn’t have an identity. See how insubstantial he looks? How plaintive? This is how it feels some days, isn’t it?

(I’m working on a big thing about Charles Dickens right now—more about it soon—and am thus bubbling over with Dickens-related trivia and conversational non sequiturs. So I’ll insert here that Dickens described this sensation as feeling “a miserable blank.” He also frequently referred in letters to a feeling he called “the vague unhappy loss or want of something.” We all know it. Carlyle on it: “… that nameless unrest… that high, sad, longing Discontent.”)

Later Chihiro sees No-Face again, this time lurking outside the bathhouse. Side note: Look how beautiful the flowers are! All of these frames just show how gorgeous the movie is. Anyway, you can’t see it but here No-Face is feeling a high, sad, longing Discontent and also checking Twitter on his phone. 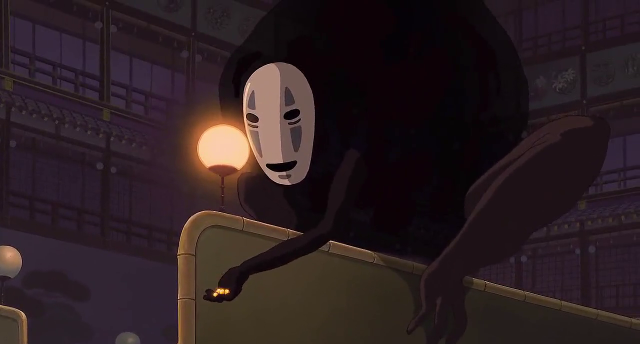 Mistaking No-Face as a bathhouse guest, Chihiro invites him inside. Once there, he appears uncertain of where to be and how to act. One of his strategies in trying to connect with others is to offer them what they want most. Hands outstretched, standing a little too close, while making odd, needy “ah ah ah” grunt noises (the same strategy I use at parties!). Mostly what he senses people wanting is gold so gold is what he gives them. Fake gold, as it turns out. In these early scenes, he reminds me of when you’re feeling insecure and off—in writing, or in life!—and you start trying to shift around for what you think people might like or want from you. “Uh, gold? How about some gold?” 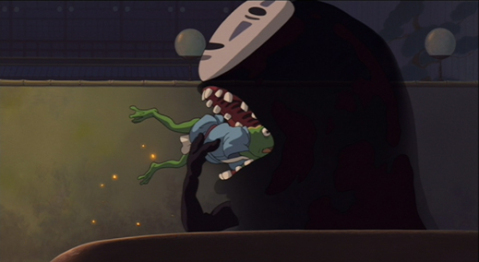 Then, of course, after you give someone the gold, you eat them! Or No-Face does. And afterward, he starts speaking in the voices of the spirits he’s ingested. Instead of having his own identity and voice, he’s projecting theirs. 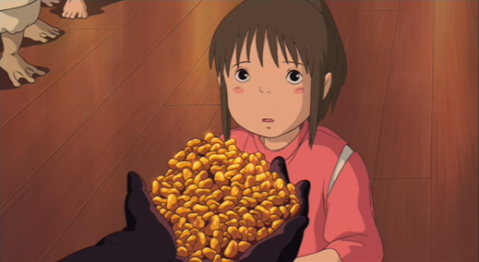 Here Chihiro is demonstrating what it feels like to be handed a bunch of fake gold by an insecure spirit-monster. 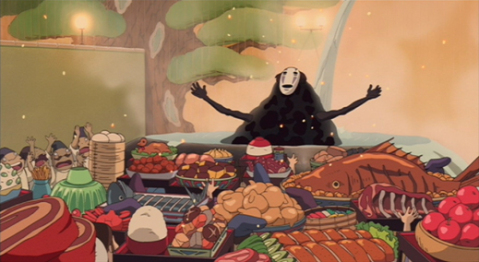 In return for the gold, the bathhouse attendants start bringing No-Face more and more things to eat. But it only makes him needier, and he grows swollen and tick-like. I associate these scenes with that feeling you get when you’re feeling strange and restless, maybe a little blue or maybe anxious, and instead of doing some work or taking a walk or doing anything you find truly enjoyable, you start clicking and clicking and clicking around the internet, hoping it’ll release the magic sugar pellet that will make you feel satisfied and content. Please note: I like the internet! I’d be bereft without it. I’m using it as shorthand here for the kind of activity that you can fall into mindlessly the way No-Face is consuming food here: i.e., something you’re not even hungry for, but you keep eating anyway. It can be too much time with your laptop. Too much Netflixing. Whatever. 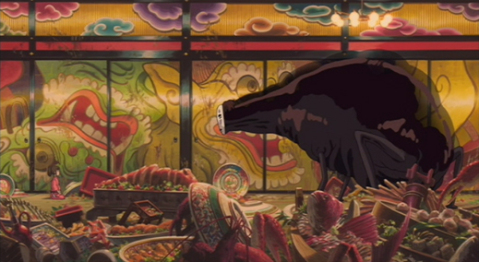 This can go on until, eventually, you feel like this. 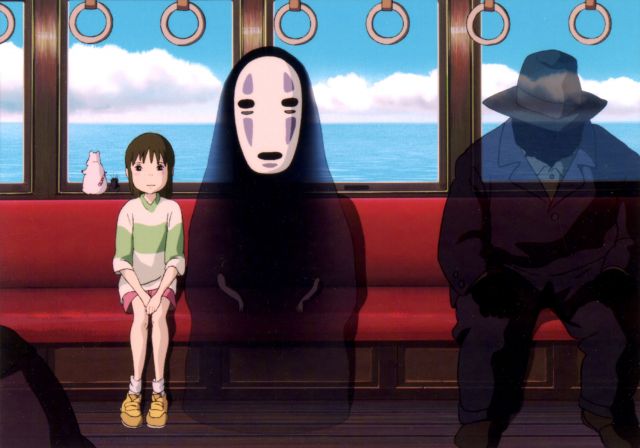 To save him, Chihiro feeds No-Face the Spirited Away version of a magic pellet, and takes him from the bathhouse on a journey with her to the granny Zeniba’s house. See, he’s already feeling much, much better! 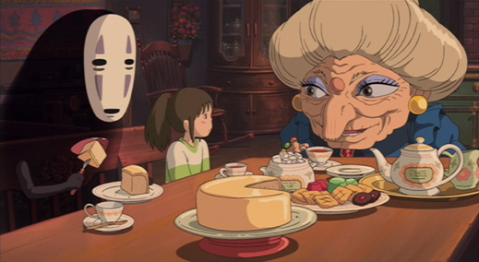 At Zeniba’s, he drinks tea. 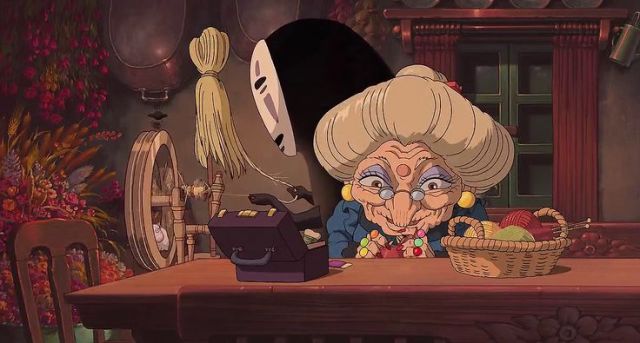 He learns to spin… 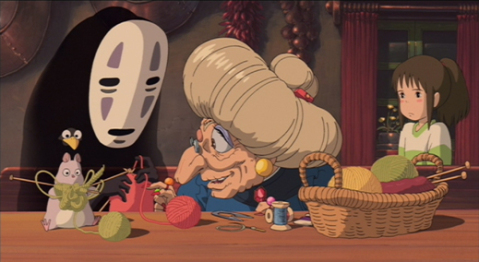 .. and knit a little. Notice, he’s not offering anyone fake gold here. He’s just hanging around, making things in a quiet way. And he grows more substantial looking. He’s welcome enough that Zeniba invites him to stay on with her, which sounds, really, like a lovely proposition. I’ve decided to think of this as Weekend at Zeniba’s self-care. Step one: change of scene. Step two: letting yourself be quiet, not trying to cover uncertainty and unhappiness by rushing at people with handfuls of fake gold. Step three: doing whatever your version is of a little knitting and spinning. Step four: staying open to the comforts of friends and tea and connection.

Until next week,
you bring the tea, I’ll bring the cake,
CAAF