When I was around age six or so, I went through a period of being afraid of vampires. I’m not sure where the fear came from—or where exactly I’d learned what it was I thought I knew about them. Which was: that vampires flew around the sky at night; that if they were flying over your house, they could hear you breathing in your bed; that the best way to hide from them was to sleep with your head under the covers. Why I thought vampires had senses sharp enough to detect a child in her bed while flying far overhead but still weak enough to be foiled by a cotton blanket… well, I don’t know. I was a kid! I played it safe and slept with my head under the covers. Always, however, somewhere in the night, I’d get too hot and come back out. I remember that part distinctly—the relief of throwing off the blanket-tent and how nice and cool my bedroom would seem afterward, even in summer. I’d lie there, reluctant to burrow back under, and hoping that the vampires, wherever they were, were still a long way off and not yet flying over my block, with its trees and streetlamps and dark slumbering houses.

Of course what you picture a vampire looking and behaving like depends on where you live in the world and during what time period. They—and their meanings—are always changing. A while back I wrote about the origins of one modern conception of vampires, as brooding lordly figures, in an essay about Lord Byron and his pained, awkward, sometimes funny relationship with his doctor John William Polidori:

An aristocratic vampire bored by his immortality — we’re accustomed to that creature now. But this sort of vampire is relatively new. As Paul Barber describes in his wonderful book, Vampires, Burial, and Death, the vampires that populated European folklore for centuries were Slavic peasant and villager revenants, ordinary people rising from their graves bloated and ruddy, with long fingernails and grave dirt in their hair. Polidori based his story “The Vampyre” on a “Fragment” written a few years before by Byron. In each story, the vampire is rich, lordly, weighted down by dissatisfaction.

He is, in other words, a personage not so unlike Lord Byron. 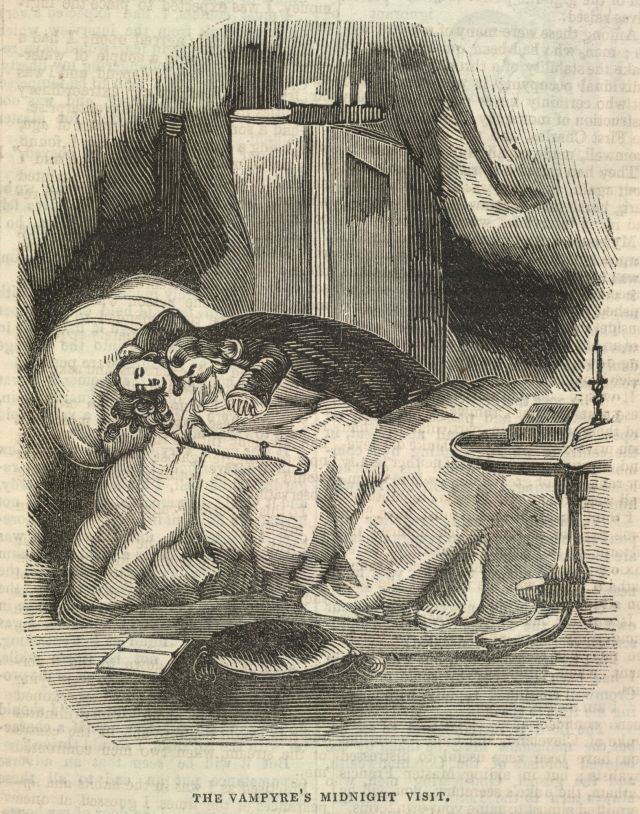 Illustration from Varney The Vampire, a penny dreadful that ran from 1845-1847.
​Image purloined from an interesting British Library post about the history of “vampire slayer kits.”

Do Vampires Even Fly?

Rereading the description of the Slavic and Byronic vampires above, I note that neither type flies. (The Byronic vampires couldn’t be arsed. “If the sky wishes to see me, pray tell it to come down here,” etc.) I’m not sure where six-year-old me got the idea that vampires fly. Dracula could fly but he did so by shape-shifting into a bat—mine just flew.

Moving forward in time: The vampires that Buffy slayed don’t fly in the TV show (excepting the dumb Dracula episode) but did in the original movie. The vampires in Anne Rice books, the Twilight books, the Blade movies and The Vampire Diaries don’t fly either—they mostly have super-speed and agility with some superhuman strength thrown in. Seems like some missed opportunities there! This useful Wikipedia page breaks down vampire beliefs around the world by region, and I see Albanian folklore had a vampire witch that would turn not into a bat, but “into a flying insect (traditionally a moth, fly or bee).” 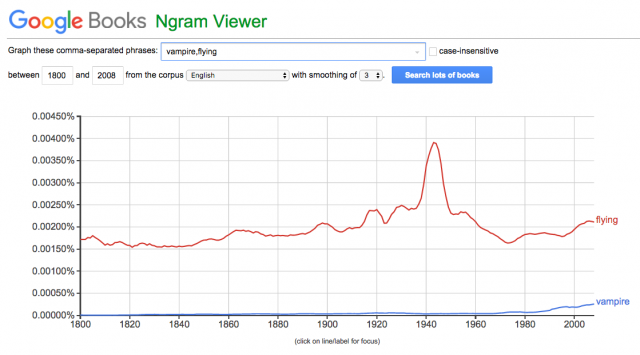 On a final related note, please be advised: my manuscript Do Vampires Poop? (1,000 pages, single spaced) remains available for publication.

Until next week,
Wishing you dreams of giddy, vampire-free flying,
CAAF