So chokers are back in fashion, huh? I still have one in my jewelry box left over from the mid ’90s I can haul out if that’s true. It only looks a little like it cost $8 and has been nesting in a tangle for twenty years. 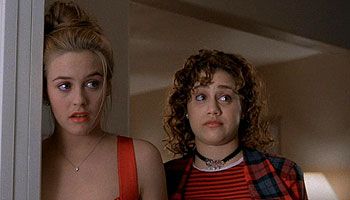 Chokers always remind me of Angela Carter’s short story “The Bloody Chamber,” published in 1979; so in honor of the current choker resurgence I thought it’d be fun to revisit the fashion in the story. I’ve written about it before (and am using some of that material here). It’s such a charged story, I think about it often. It’s a retelling of “Bluebeard” in which the young narrator, a penniless pianist, becomes the bride of the richest man in France. Like the narrator of Rebecca (another Bluebeard tale), this new bride does not give us her name. Or her groom’s. But we learn that he’s a marquis, much older, and has been thrice married and thrice widowed. On the day of their wedding, he whisks her off to a remote seaside castle bristling with treasures: A Bechstein in the music room, cabinets of Limoges and Sèvres, a library lined with “calf-bound volumes, brown and olive, with gilt lettering on their spines, the octavo in brilliant scarlet morocco.” In other words, this Bluebeard is a connoisseur and collector of many fine things, including wives.

He gives her an extravagant bridal trousseau, which includes a certain Poiret dress that she wears a few times over the course of the story—first on a trip to the opera to see Tristan und Isolde on the eve of her marriage and then again on the evening after she’s lost her virginity at the castle by the sea. Poiret was a French couturier. As the Met says in their timeline of art history: “Every decade has its seer or sybil of style, a designer who, above all others, is able to divine and define the desires of women. In the 1910s, this oracle of the mode was Paul Poiret, known in America as ‘The King of Fashion.'” (The Met put on a gorgeous exhibition of his work in 2007 and the images can be viewed here.)

The Poiret worn in Carter’s story is described as “a sinuous shift of white muslin tied with a silk string under the breasts,” although later it’s a “chaste little Poiret shift.” So: It’s sensually provoking to wear, yet virginal to look at. Poiret was famous for having done away with corsets in his designs, so there lies another level of freedom represented in the dress and its ability to “define the desires of women.” (Please note: Poiret may have put the kibosh on the corset but he also introduced “the hobble skirt,” so it’s a mixed bag there. A mixed hard-to-walk-in bag.)

Of the Poiret dresses I looked at online, this one looks the most similar to the one in Carter’s story—it’s a 1913 “Théâtre des Champs-Élysées” evening gown made of ivory silk damask with an overskirt of ivory silk tulle.

On all the occasions that the narrator wears the dress, the marquis requests that she pair it with the necklace he’s given her as a wedding gift. This is “a choker of rubies, two inches wide,” which when clasped around her throat looks “like an extraordinarily precious slit throat.”

The choker once belonged to the marquis’ grandmother, the bride tells us:

After the Terror, in the early days of the Directory, the aristos who’d escaped the guillotine had an ironic fad of tying a red ribbon round their necks at just the point where the blade would have sliced it through, a red ribbon like the memory of a wound. And his grandmother, taken with the notion, had her ribbon made up in rubies; such a gesture of luxurious defiance.

Later, of course, the marquis will try to lop off her head. Let this be a lesson: inspect those gifts of jewels for all possible meaning and significance before accepting!

Interestingly, decapitation also pops up in an anecdote connected to Poiret’s own life. As Hamish Bowles recounted in a story for Vogue, the Parisian designer’s early clients were put off by the “brazen modernity of his designs, such as a Confucius coat innovatively cut like a kimono. ‘What a horror,’ Poiret recalled the formidable Russian Princess Bariatinsky exclaiming when he presented her with it. ‘When there are low fellows who run after our sledges and annoy us, we have their heads cut off, and we put them in sacks just like that.'”

Yours until Thursday,
Hoping you keep your head while all about you are losing theirs etc.,
CAAF