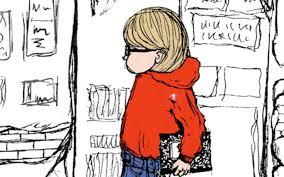 The past couple months of letters have been (mostly) dedicated to strategies of what to do when you’re stuck and anxious about a project. I have a couple other topics related to this that I may circle back to, but I’m feeling ready to push on and thought you might be ready too!

If you’re catching up, or wanted an all-in-one-place corral for that first block of letters, here is what’s been covered (I’ve asterisked my three favorites):

• Picturing a better Ideal Reader for your work, using the Gothic novelist (and fantastic letter-writer) Horace Walpole as an example.
* • The lessons on empathy and how to be a writer offered by Harriet The Spy, including its wisdom on keeping a notebook and being absolutely honest in it.

We then entered the Julia Cameron-Artist’s Way-sponsored era of the newsletter, with some entries on notebooks and encouragement to go on weekly Artist’s Dates. I was as shocked as anyone to end up there.

• A discussion about how daily notebooking/ Morning Pages can push you past the urge to censor yourself. (The Schiller quote in this one was the highlight here.)
• A look inside other people’s notebooks, including notebooks of Sylvia Plath, Octavia Butler, and Frida Kahlo.
• An appreciation of Artist’s Dates and the ways in which they can nudge you into a more active stance with your work.
• The Artist’s Way sponsorship-tribute tour concluded last week with this wrap-up.

Other letters hit on:
* • The importance of not strangling yourself or stepping on your own throat. This letter included advice from my friend Maud as well as Martha Graham’s advice to Agnes de Mille, which is an extremely helpful thing to keep around and reread in times of trouble and woe.
• Advice on Bolting Forward, with spider & web-spinning visioning (hee!).
• Spider inspiration continued with a note on the inspirational ballooning habits of young spiders, with Jean Craighead George and E.B. White.
• And finally writing advice from hot yoga: “point in the direction you want to go.”

Then inspirational examples of writing and reading from these writers:
* • How Sylvia Plath used a pile of art books to feed her poems and push her way through a writing break-through. (Judging from emails, however, I think the main takeaway from this one was that we should all buy some Floradix. I plan to pick some up tonight!)
• Ta-Nehisi Coates’ “three books at a time” library system for learning the world.
• And writing advice from Hilary Mantel, with an aside on the binder that Mantel has of notes for her current in-progress book, may it be sailing along mightily and well, amen.

Where We’re Going Next

So that’s the “where we’ve been” part. As we move into summer, I wanted to write along looser bookish-inspiration lines—generally, just nattering about topics I’m interested in that I hope will be interesting to you too—then, in fall, get into some actual editing-pruning advice. When I was first planning this newsletter, I was thinking that that sort of arc made sense as fall’s a good time to think about disattachment and letting go, and hence: ruthless editing. As I write this now I keep wanting to describe the summer series with similar seasonal imagery, along the lines of “how things grow and wax in summer blah blah blah”—but I’ve been reading Frankenstein and the one phrase that keeps popping into my head is “Feed your monsters!” The topics for the next couple weeks are gruesome and graveyard-ish (sorry; again, am reading Frankensteinnnnn), so that’s fitting enough. It’ll be a “Feed Your Monsters” summer. Loosey-goosey goosebumps.

One Other Bookkeeping Note

Right now this letter goes out twice weekly, Tuesdays and Thursdays, with Tuesday’s note longer and Thursday’s note shorter. The week of June 6th, I’ll be going to summer hours and it’ll come only on Thursdays until the week of September 12. (I’m not sure how many people would even notice this switch—but just so you know!)

Yours until Thursday,
Wishing you and your monsters the very, very best,
CAAF