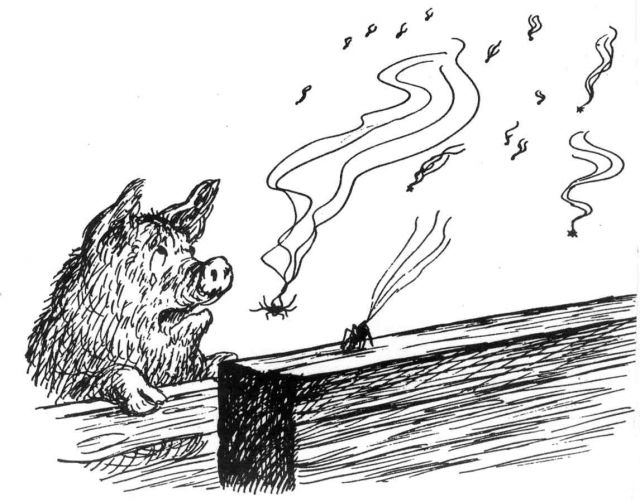 An illustration by Garth Williams from E.B. White’s Charlotte’s Web.
Here Wilbur is observing an aerial silks class at his local pilates studio.

The other day I was looking through an old book called Our Amazing World of Nature. It was published by Reader’s Digest in 1969, and when I was a kid it was one of my favorite books to leaf through on weekends. It’s a big book—with lots and lots of pictures: a snake eating a frog (the frog looks philosophical), sharks, seals, an owl, a bright toucan, a bee stuck in a Venus flytrap, a family of monkeys grooming each other, that sort of thing. On page 140, there’s a picture of a “hungry moray eel” lurking in a coral reef with its mouth open and all its tiny pointy teeth on display. This picture was so horrifying-fascinating to me as a child that whenever swimming in Lake Michigan, I was extremely loathe to put my feet down on the sandy bottom but would swim and tread with my legs drawn up for as long as could be managed. (Beware the moray eels of the Great Lakes!) 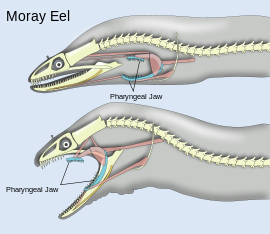 A while back my parents were shedding books before a move to a smaller house, and this was one of the books I stole off with. It now smells musty and like the ’70s. The chapter titles have a time-specific aroma too:

Nobody Loves A Crocodile
What Snakes Are Really Like
Fish In Love
That Remarkable Creature, the Snail

The writing in the book is great—I’d gladly attend any party with the contributors of Our Amazing World of Nature to drink cocktails and jabber about that remarkable creature, the snail. On this recent revisit I was especially taken with the chapter on spiders, “The Wizardry of Webs,” which was written by Jean George. I am 98% certain that this is the same marvelous Jean Craighead George who wrote Julie of the Wolves and My Side of The Mountain (!!). There are no contributor notes in Our Amazing World of Nature (the project was too important for ego) but if you know George’s other work, it seems likely it’s her. It delighted me to read the chapter over the weekend, admire it, wonder about who had written it, and connect it back to her. (I figure it is either her or a nice, rather gentle Frenchman named Jean.)

Here’s George on spiders and their mating habits. It’s a cheap and obvious joke, but it’s entertaining to me to replace “spiders” in here with “writers.”

Spiders are predators, the best insect killers known; in fact they will even kill one another if there is no communication between them. So spiders, too, must be careful of others’ webs, for most of them work in the dark of night, are nearsighted and have no ears but their threads.

Under these conditions it is no wonder that their means of reproduction is the most complicated on earth.

OK, then here’s my favorite bit, which I wanted to share in honor of the Bolt Forward. In that letter, you may remember, I mentioned that I sometimes thinking of writing as shooting a web from your spider ass, and whatever comes out —silk, rayon-blend, polyester—is all to the good because it’s all something towards having a draft. Your mileage and enjoyment in using this metaphor may vary! But here, courtesy of Jean George, is another—and it has to be said, far lovelier—spidery way to visualize yourself moving forward with whatever project you’re working on:

Last spring I watched a hatch of grass spiders emerge from their egg case and crawl down silken avenues to disappear in the garden plants. As they went they trailed behind a veil of threads that heaved and rippled between the leaves of the iris and ferns. One spiderling eight-footed its way to the top of a dried chrysanthemum stalk, where it circled until it faced the wind. Then it threw up its hind legs, and stood on its head like an acrobat. In this position it spun out two or three feet of ballooning thread, a dry and wide strand. Then it let go of the stalk, grabbed the silk with its front legs, and in the best circus tradition went flying through the air. Aided by the wind, it guided itself around the elm in the yard by pulling in on the stream and then letting it out. The wind bowed it. As it billowed away it stuck the edge of the house and was stopped. There the spiderling reeled in its slender balloon and hurried to the porch roof to take off again. In this splendid manner it sailed out of sight.

During the spring and summer when spiderlings go ballooning, as this is called, the sky is filled with tons of dragline, known as gossamer. In some places it will fall to earth with the rain in such abundance that the grass is swathed in white silk. In Yosemite Valley, California, it is periodically trapped in sheets between the stone arches. When the sheets are thick enough the wind carries them off like glittering laundry and wraps them over the trees, until the forest is eerily shrouded in silk, like furniture in a deserted mansion.

Our amazing world of nature INDEED. If you’re already familiar with the ballooning habits of young spiders, it may be thanks to the scene at the end of Charlotte’s Web when Charlotte’s children begin ballooning from the barn.

Wilbur was frantic. Charlotte’s babies were disappearing at a great rate.

“Come back, children!” he cried.

One of the spiders pauses to explain how she and her siblings are using the breeze to draft themselves out into the world.

“But where?” asked Wilbur.

“Wherever the wind takes us. High, low. Near, far. East, west. North, south. We take to the breeze, we go as we please.”

“Are all of you going?” asked Wilbur. “You can’t all go. I would be left alone, with no friends. Your mother wouldn’t want that to happen, I’m sure.”

The air was now so full of balloonists that the barn cellar looked almost as though a mist had gathered. Balloons by the dozen were rising, circling, and drifting away through the door, sailing off on the gentle wind.

(If you’re concerned about Wilbur, don’t worry—three of the young spiders stay. And spoiler: The pig makes it through the book.)

It’s spring—which is sometimes dreich but sometimes beautiful and un-dreich too, especially now that we’re scooting into May. If you’ve been waiting, now might be a good time to head out. East, west. North, south. Wherever you please.

Yours until Thursday,
wishing you happy ballooning in the breeze,
CAAF