First three rows of image results when you google ‘dreich.’

In a previous note I talked about the words ‘fink’ and ‘swivet.’ For today’s short, sweet Thursday note, I have another pair of words, these U.K. angled: ‘stodgy’ and ‘dreich.’

‘Stodgy’ came up while watching an early season of ‘The Great British Baking Show.’ Paul Hollywood used it to describe someone’s bread: “That’s a little stodgy.” I only knew the word in the sense of “dull, unimaginative, and staid” and was a little taken aback. Huh, I guess the baked-goods world really looks down on fennel seed bread. After it got thrown around a few more times I realized that it must have a different meaning in Britain. And it does! ‘Stodgy,’ in the British baking sense, means “overly dense.” Another place I looked it up described it as “heavy, filling, and high in carbohydrates”—which, actually, sound like wonderful qualities in a foodstuff.

I found it used in this sense in an 1884 book titled Sweet Dishes: A Little Treatise on Confectionery and Entremets Sucrés. Including it here in case you’re in the mood to bring a plain plum cake to the office next week:

The second word ‘dreich’ is courtesy of a (Scottish) twitter pal, who commented recently “April can be dreich.” Weirdly, I was ready to agree with the statement even before knowing what ‘dreich’ meant. It turns out that it’s a Scottish word that means “dreary or bleak, especially referring to weather.” So if Charles Dickens had been born in Edinburgh, the novel would have been Dreich House —hahahaha! Where are you going? ‘Dreich’ goes with another good weather word, ‘mizzle,’ and it comes up alphabetically between ‘dregs’ and ‘drench’ and this also seems appropriate. One online dictionary listed its origin as: Middle English (in the sense ‘patient, long-suffering’): of Germanic origin, corresponding to Old Norse drjúgr ‘enduring, lasting.‘

The listing below comes from an 1808 dictionary of the Scottish language, and here you can see the meanings of ‘tedious and wearisome’ and ‘miserable weather’ are yoked together: 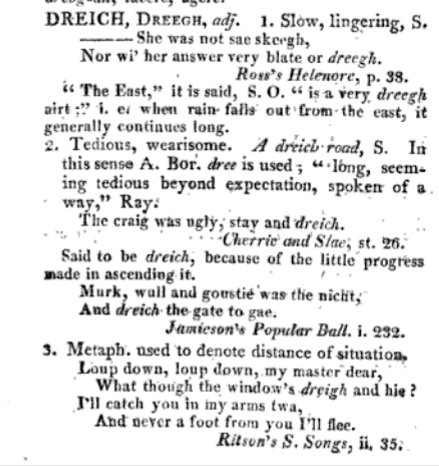 Fast-forward to its modern cast, from Urban Dictionary. 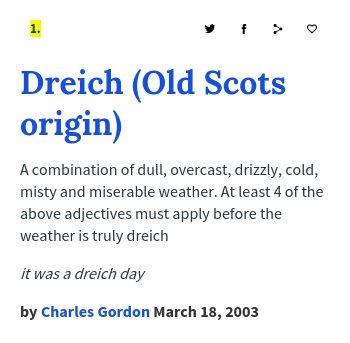 Take these words and may they comfort you on days when it rains, the road is long and wearisome, and the airport bagel you ate in Terminal C 100% unsatisfactory.

Until next Tuesday,
Wishing you plain plum cakes and fancy ones too,
CAAF