I have been reacquainting myself with my book this week after taking a month or so off to work on a couple other big projects (more on one below!). So far it’s been like a coffee date with someone you used to go out with and were really close to, but haven’t seen in a long time: Awkward silences, fitful affection, occasional bursts of “Did you… do something with your hair?”

I hope to be back on familiar, easy terms with the book by next week—or at least easier terms—but in the meantime, it’s been making me think of the famous Elizabeth Gilbert TED Talk from 2009 about “Elusive Creative Genius.” Specifically, the part where she talks about ancient Greek and Roman beliefs about creativity:

In ancient Greece and ancient Rome, people did not happen to believe that creativity came from human beings. Back then, people believed that creativity was this divine attendant spirit that came to human beings from some distant and unknowable source for distant and unknowable reasons. The Greeks famously called these divine attendant spirits of creativity ‘Daemons.’ Socrates famously believed that he had a Daemon who spoke to him from afar. The Romans had the same idea but they called that sort of disembodied spirit a ‘Genius,’ which was great because the Romans did not actually think that a genius was a particularly clever individual. They believed that a genius was this sort of magical divine entity who was believed to literally live in the walls of an artist’s studio… and who would come out and invisibly assist the artist with their work and who would shape the outcome of that work.

I remember liking the idea of this when the talk came out and wanting to know more, with the same part of me that, as a little kid, used to love D’Aulaires’ Book of Greek Myths with all its big, sherbet-y illustrations. What did the genii that lived in the walls look like? Mice? Keebler Elves? Etc. “Elizabeth Gilbert, please stop your TED talk right there and explain a little more.” I’ve always meant to look it up and this week finally did. I couldn’t find anything artist-genii specific—and if any of you out there know more, please point me toward good sources—but I did find some interesting things in an 1849 book on Greek and Roman mythology by Mary Ann Dwight. From a chapter called “Genii and Inferior Deities”: 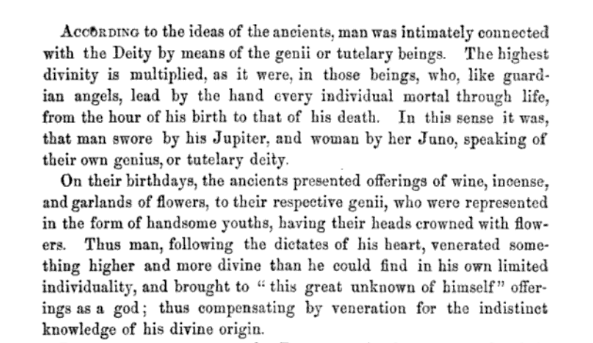 These genii, Dwight says, were “the powers that produce life.” They were neither mouse-, cat-, or Keebler elf-shaped, but took the form of youths or serpents:

Here’s an illustration of a “youth” genius who has made himself visible. 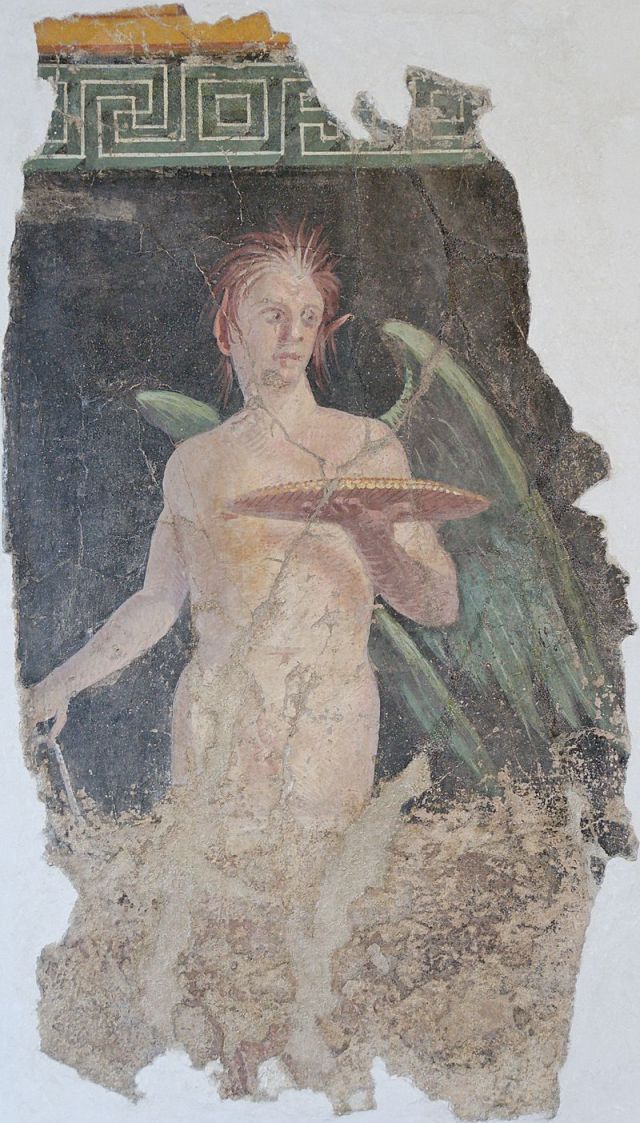 Roman genius with the odd hair, found near Pompeii. (Via.)

Huh. He looks… like a member of an 80s synth band?

Mostly what I like about all this is the idea of making offerings to your genii—or daemons—when you’re going through a creative dry spell. In Dwight’s book, she mentions wine, incense, and flowers as being offered on birthdays, all gifts that were believed to increase the genii’s vitality. In the second passage, she notes that a genius was often portrayed as “eating fruit placed before him,” so I’m ruling fruit as a good offering too. All of which is to suggest that if you, like me, are attempting to get on a better terms with a project right now, instead of struggling against it and feeling terrible, maybe go buy it some fruit this weekend. Cherries and strawberries are so great right now but I’d just go with whatever looks especially appealing and decadent. And/or maybe get a bouquet of summer flowers. Put out the flowers. Eat your Goblin Market fruit. Relax a little. Work a little. Trust that your genius will show up.

Later this morning, at 11, The Toast will be running an essay I wrote on the history of Miss Havisham. It ended up being a whomping cake of an essay, all about how her origins intersect with the life of Charles Dickens. I’m excited about it and hope you’ll enjoy it. Most importantly, I hope you’ll join me in saluting and cheering The Toast as they close out a magnificent and magical three-year run.

Until next week,
wishing your genii rare pears and much vitality,
CAAF